No. 699: The Catholic Church's imposition of celibacy is seducing spirits and demons learn behind , according to the Apostle Paul!

The Catholic Church's imposition of celibacy is seducing spirits and demons learn behind , according to the Apostle Paul!

1 Tim . 4 1 Spirit speaketh expressly, that in the latter times some shall depart from the faith. They should stick to seducing spirits , and demons teach 3b These forbid people to marry 4 Everything God created is good , and nothing will be rejected if it is received with thanksgiving .

Photo of the false prophet Ulf Ekman who has been a Catholic. He has gone astray throughout their lives , so too now. 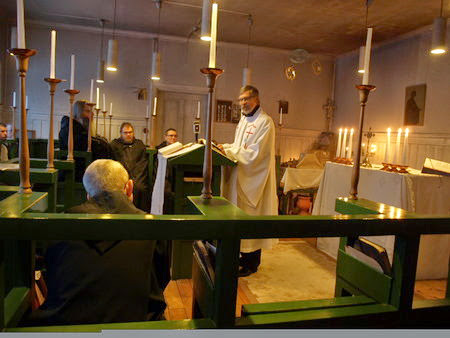 Celibacy lift within its Catholic church

From Wikipedia: But it was Pope Gregory VII (1073-1085) who got carried celibacy for the whole church clergy. This happened when his solemn statement at the Council of Rome in 1074, that everyone would have a spiritual ministry had to be committed to celibacy . Sølibatskravet were also tightened up on meetings in Reims in 1119 , and the meetings in Rome in 1123 and 1139 stated the scheme as part of the later canonical law. For the lower clergy , however, this enforced any more careful , especially under popes Boniface VIII (1294-1303) and Clement V ( 1305-1314 ) . The Council of Trent also adopted a number of provisions with regard to celibacy in the Roman Catholic Church.

There are several reasons why the Catholic Church requires its priests be celibate . Originally reasons for sølibatskravet to ensure clergy focus on the spiritual life , and to prevent the foundation ecclesiastical dynasties , and that ecclesiastical offices and estates passed on . Today is one of the reasons that the priest should be available to the congregation when it needs it , and not be tied to a family and its requirements. A more practical and pragmatic grounds as sometimes claimed in the popular quarters, it is also cheaper for the church to provide a pastor without children. ( end of quote ) .

From the Catholic Church 's own website : At the beginning of the 4th century we find the first law provisions .

Synod in Ankyra (314 ) allowed a deacon married only for those cases that by ordination had reserved the right to marry later. If he had not reserved to this , and yet married , he would be deprived of office ( Can. 10).

Synod in Neocaesarea (314 ) threatened clergy who married deposition ( Can. 1). Synod of Elvira ( ca. 306) in Spain forbade bishops , priests , deacons and all klerikere that could make altar service , to have sexual intercourse with their wives ( kan. 33).

At the Council of Nicaea ( 325 ) , attempts were made to make the prohibition against bishops , priests , deacons and subdeacon sexual intercourse applicable throughout the church. But it failed, especially because of the Bishop Paphnutius resistance. He feared that such a law would only lead to fornication ( Socrates HE I, 11 , in Gratian : C. 12 D. 31).

In the Latin Church can no married man become priesthood or consecrated , however , a married man devoted to permanent deacon . In the case of the deacon becomes a widower , he can not remarry .

Exceptions may be granted by the Pope for marrying non- Catholic clergy who convert , and for married couples where the husband and wife go to every monastery on its edge . In the Eastern Catholic Churches is the image variable (see above) . But as a general rule that no ordained person can marry, and that married men can be devoted deacon and later priest paid - but not bishops paid . ( end of quote ) .

There is only one thing to say to this, there are glaring , unbiblical and totally meaningless . Through this rule , the Catholic church the world's largest sex ring that priests , cardinals and other abuses of innocent children. Nuns and monks have sex. Sex in all varieties takes place within its katoslke the church when we are created male and female. And also live out this having sex . But within its the limits God has said , in marriage.