No. 696: 10 new reasons because I do not follow Ulf Ekman in the Catholic church! Part 2

10 new reasons because I do not follow Ulf Ekman in the Catholic church! Part 2

I have never been sectarian , party sinet or thought that I or "my " denomination has had the full and complete truth . But it is allowed to think that something is right and something is wrong . There are those I have confidence in , and there are those I do not have confidence . That Ulf Ekman converts and justifies this by saying that the Catholic Church has more of the truth a second for me is very applied , shallow and in many ways a lie ! But now Ulf Ekman always been a liar , and that he continues is only a continuation of an old rut . Ekman statement why he is a Catholic is probably the biggest lie I 've ever heard of a so-called Christian leader : " The Catholic Church has the most perfect expression of Christian unity ."

To make such call-out must be strong and powerful deceived deceived in their faith !

Maria was a God loving young maiden who received the Great Commission to bear the Son of God . That Catholics adds so much more to this, both sad and spiritualist . 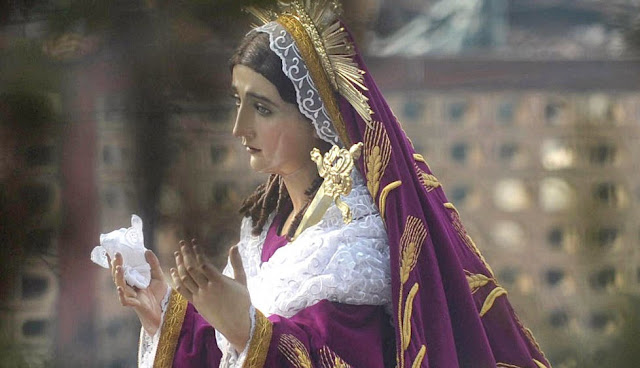 1 ) That Ulf Ekman are not Catholic amazes me. In fact, I heard the warning about this already in the 1980s by a group from the United States that called for the Norwegian Concerned Christians . They believed that it was only a step from the religious movement of the Catholic Church as the structure of the congregation / church is quite similar . Where hierarchy prevails , not the word of God . God's word speaks that we are equals with Elder, deacons , etc. We serve God - in total - but the Catholic church has an extensive hierarchy of Faith Movement.

2 ) I also have some positive views on the Catholic Church . And there are many devout and good Catholics , but where I have problems , above all, the Catholic Church is its erroneous teachings. Ulf Ekman add now under this system and learn before he warned against. Once he was welcomed - and justifiably - but now ! Here is a man who has turned 180 degrees , or has he? Scripture says about him such as the following: 1 John 2:19 They went out from us , but they were not of us : for if they had been of us , they would have remained with us ; but it should be obvious that not all of us .

3 ) Ulf Ekman has approx . 1980 built up TB and Word of Life . He has been an undisputed leader, pioneer , Pastor, Shepherd, yes everything. This has led him and his famille forward in every way that he is of course many millions , sitting with stocks and everything in the Word of Life , etc. He is currently retired and lives as a course carefree life in the economic and in all other planes would a faith. But then he finds out that he has the opportunity to come forward and create more publicity for themselves? I do not know what ? But to leave something that one has built up so , and that thousands of people have given you really everything . So fail them , this shows that he is among the bad shepherds who featured in the word of God more seats . Among other things, in Ezekiel 34 and Joh.e. 10

Joh . AD 10 12 But he that is an hireling and not a shepherd , who does not own the sheep , he leaves them and runs away when he sees the wolf coming , and the wolf descends upon them and scatters them . 13 For he is only hireling and careth not for the sheep

4 ) Pastor Ulf is now becoming Catholic. Then he subjugated a doctrine , a system and all its doctrines and otherwise what it stands for. It is my conclusion. However, as already mentioned this is the hierarchy and even the structure that TB and the Word of Life . And the Catholic church is quite similar. With Pope on top, contrary to the word of God and what Jesus taught and taught . Jesus clearly says the following:

Matt . 23 8 But you will not let anyone call you Rabbi , for one is your master , and you are all brothers . 9 And do not call anyone on earth your father , for one is your Father , He who is in heaven. 10 Let not anyone call you teachers, for you have one Teacher , the Christ . 11 The greatest among you shall be your servant theirs. 12 Whoever exalts himself will be humbled , and whoever humbles himself will be exalted .

Could still here , but basically are either the Catholic Church or the Word of Life a biblical church when they do not have a biblical and right ward scheme and biblical structure of the congregation / church.

5 ) The current Pope 's Jesuit Priest. This scheme was created to " capture " the Protestants and also engage in armed struggle to defend Catholics against infiltration , resistance and of all else. In many ways they are an extension of the Swiss Guard . The foremost and most famous Jesuit priest Francis Xavier as the current Pope has called up by calling for Pope Francis 1 This adds Pastor Ulf Ekman under now.

6 ) This is now Ekman has done, is also a huge breach of trust to those who have stood by him in all the years that he has been the head , shepherd and pastor of Word of Life . A person who is abusing / using other people so for me its very narcissistic personality and psycho controlled . It turns out that this conversion is many years ago. That he took the step fully out now, was merely the result and fruit of his family and close contacts and friendships with other Katolikere .

7 ) Is Ekmans transition to the Catholic Church completely trustworthy ? He is still the true owner of Word of Life with its famille . Is retired and then retiring from Word of Life indirect and direct. And all the royalties of sales of all books , speeches etc. of him he will receive lifetime. The man has secured himself and his famille very well and will forever be financially secured , then from the congregation and the community he leaves . This he said in of itself , but retains this life for himself and his family.

8 ) Ekman has peaked in TB . He has come to the weighted end . For then to progress , then the Catholic church next stop. That is the reality . He has always been, remains and is a scam , power man and a false prophet. We need only establish as a fact .

9 ) the Virgin Mary for Catholics on par with Jesus , and climb milling with Jesus. This is among the doctrine Ekman now endorses . The whole cult of Maria Catholics advance . And it's spiritualist when Mary reveals itself for some Katolikere and other vas they hold on to.

10 ) Ekman as x Protestant show by their conversion that the Reformation was a mistake ! Our actions tell a thousand words they say. To go from being Protestant to then being Catholic is a huge mistake. Everything with Ekman testify that there is a man who is totally confused and unsatisfied .

Ekman not become a heresy. He has been all his life . But those who have believed in him before, they are just as misguided as Ekman . If the blind lead the blind , they both fall into the ditch . This