How to care for father's role and be a good role model!?

Being a good father is probably the most important job a man who is married and has children. Therefore, there are some things the father's role we need to look at. My own father died just now was a tender and loving father that I throughout life on high. Here he is pictured shortly before he died. But it is also good to have good memories, very good memories of my father. Not least through adolescence is the most important period of life to be a good father. 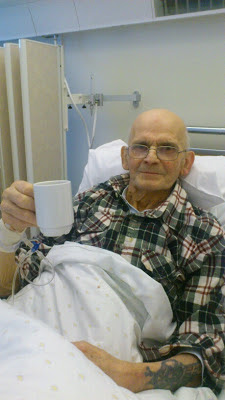 Ephesians 6:2 Honour thy father and thy mother - this is the first commandment with promise.

I could have written so much about the father's role, and it can be amplified in so many ways. Want to set up ten (10) pages of paternal role that I consider very important.

1) A good father is faith against their marriage promise by never initiate a relationship with someone other than his wife.

This is the crucial and most important point of being a good father. Be faithful in marriage. This can of course be written and said so much about. But have written so much about this in other articles that I'm referring to there.

2) Father has the largest and most important responsibility for the economy of the family. When that parent. This is also something that society emphasizes. Therefore, and the entire family standing behind man in his daily work. Pray for him, God bless him so that the money and the admission is needed, comes into play. It is not a matter of course, although we here in Norway has exceptionally well on the economic level.

It's father's mission to be the premier and leader of the children and also mother's spiritual life intact. When the Bible reading, prayer, conversation, study of scripture and otherwise meet again. Here the father being a leader and taking responsibility. And everyone else in the family has a task it is to follow the father here and submit to him.

4) Working with keeping a home in order are both tasks, the mother and father. But the father is working out, he has also the duties and responsibilities of a home. Not the least of the things that are too heavy and too difficult for others in the family. Here in Norway we think often about such things like that to arrange car, work outdoors and more. A good father is also hardworking.

5) A good father takes the kids on a trip, activities and play. That's fine with their own study and own hobbies. But they should not take so rampant that one does not have time for their children and emphasize the activities for them. It is important for him while the kids are young and growing up. The day the kids are out of the nest and take care of themselves, then he is allowed to set their own hobbies and interests first, again. But while he has kids they will go above all, if he shall destroy themselves and their own interests entirely. The one who fears God finds a way between both wrote wise King Solomon.

6) A good father encourages kids to what they're good at and me to add a running track for them. This can be misunderstood. But good parents will have advice for their children when they know their good and also bad qualities. Children need advice for choosing the right things. In order to make the good choices!

7) Stabilizer that provides a home stability is dad's job. A good father is as a stabilizer in the home. Are any other high up or low down. So far no rash and everything.

8) Available. Although a good father live an active life and sure have many "irons" in the fire, so he is available. Can sit down, listen, guide and be a good conversationalist. He has track of it all.

9) Father's head in the marriage and the home, just as Christ is head of the church, the man is the head of the marriage. What does it mean to be the head? It is the one that ultimately takes the decision, lead by example and see the end from the beginning. Here the task is so great that such a good father will never be without being totally committed God, led and guided by Him!

10) A good father supports everyone in the family, especially the mother. Father is the most stable, positive and generally encouraging person in the family. While mom turns, the father even. While mom showing emotions in extremes, there is a father who says wait. In a good family complements all together, but the father's role is for the mature, secure and stable man who is coming over youth and single status and is now "gone" than he was in his youth.

Being a good father is something completely different than being a wanton youth. Therefore, what we see today with regard to remarriage and divorce that the father has betrayed her husband's role in the cause of it. He will be as faithful to the church as Christ is. How is Christ, how is the church. We know that unfortunately fails congregation again and again, but never Christ. Therefore, the main cause of all homes that dissolves and new relationships that the man fails. His main task is to be faithful, even if others are not.

Taking finally some words from the book Retrieved "Good Dad" by Peder Kjøs. This is a secular book, but has much going for it:

How to be a good dad?

Tips on how to be a good father

1 Engage. Stand next to the mother once the baby is born. Carry baby sprinkle it in your sleep, talk and chatter, play with it and changing it. Cabinet proximity to the child.

2 Change diapers. It's a simple thing, and smells only hurts for a few seconds.

3 Take paternity leave. A Swedish study shows that paternity leave means less risk of divorce. You are strongly related to the child, the more trust of his wife.

4 Take advantage of mom. Take an active, caring dad role, also facing the mother. She is probably a lot more tired than you. Just to breastfeed for many incredibly exhausting.

5 Do not whine about the sex. Maser father about sex, the mother will feel unappreciated, understood and taken into account. Most couples have less sex than before the first 6-12 months after birth. Remember sex empines not last forever.