Nr. 519: By looking at the history and the Jews, we Jews learn better knowing. Ourselves and God!

By looking at the history and the Jews, we Jews learn better knowing. Ourselves and God!

A film or documentary film that affected me a lot was the documentary BBC2 sent 1 June 2013 called Love in the shadow of Hitler, here is the couple's documentary mostly about. The German soldier Helmuth and Jutta and her Jewish famille. 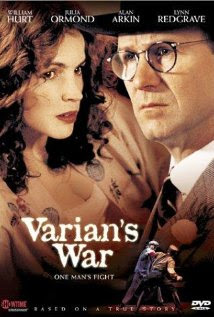 I recommend everyone to see Jewish films and documentaries. It does something to us, here are some recommendations:

Love in the Shadow of Hitler Topics: documentary and factual, love, Jews, Nazis, Operation Valkyrie, adolf hitler Am. documentary. A Jewish teenage girl and injured German soldier became lovers. They participated in the plot "Operation Valkyrie" to execute Hitler. The chances of being killed was imminent. But they got away and was later the first couple who married in postwar Berlin. (Surviving Hitler) Original Title: Surviving Hitler

Another film that has made great impression on me:

The year is 1938. Varian Fry, an American journalist, is in the middle of Hitler's war-torn Germany. Here he witnessed the dictator's violent forward momentum in the streets of Berlin.

Back in New York is the first no one believes what he says, but little by little he wins the trust of a group of unexpected allies. In 1940, Fry comes to France with an American aid organization, a list of 200 names and a thoroughly prepared escape plan. Using illegal, dangerous and will hopefully successful methods: Can a man save thousands of refugees from torture and death before he is discovered?

Is a book which has also been film, which is built on what was happening. This is from Wikipedia: Sarah's Key is a novel that deals with the infamous collection of French Jews in Paris in July 1942. The gathering is also known as the Vel d `HIV. The book is published in many languages, sold over seven million copies, and was over 100 weeks on the New York Times's bestseller list. The book was later made into a film, and premiered 1 April 2011

The reader follows mainly two parallel stories that are interwoven throughout the book. One story is about the ten year old Sarah Starzynski, a Jewish girl born in Paris, who were arrested along with their parents during the recovery operation Vel 'd'Hiv. Before the family benefits from the apartment, Sarah locks her four year old brother in a cupboard to hide him from the French police, and she believes that family comes back in a few hours. But Sarah does not come back to the apartment until several months later, and in the meantime door brother, locked in the closet. The second story is about Julia Jarmond, an American journalist living in Paris, who are asked to write an article in honor of the 60th anniversary of the collection of French Jews. (End of quote)

Form I this is both informative, some entertainment and a small hobby to get a little insight into Jewish history. Also recommend books and other literature so off we both can understand better Jews, better ourselves and through that, I think we learn to know God better. That he, in spite of their great betrayal against him by rejecting his Son Jesus Christ. So he has promised to be with them, even until the end. Yes as long as the world endures.

Jer 31:37 Thus saith the Lord: If the heavens above can be measured, and the foundations out beneath, I will also cast off all the seed of Israel for all that they have done, saith the Lord.