Nr. 460: Pastor and Apostle Jan Aage Torp shows in everything he does, writes and says he does not know the living God! Let's take a lesson and go the opposite way!

Pastor and Apostle Jan Aage Torp shows in everything he does, writes and says he does not know the living God! Let's take a lesson and go the opposite way!

Pastor Torp has become spiritual leprosy that King Uzziah, and Uzziah lived alone with his illness he would not spread it to others. God's word is also very clear that this should Pastor Torp also do live completely isolated. Torp should have dressed in sackcloth and ashes instead would promote themselves constantly 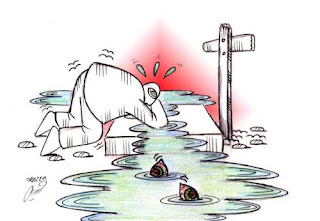 Pastor Torp is a learning example of how things should not be done, we have much to learn as well by those who believe mistakes all the time and in the crucial areas of life!

Rom. 15. 4 For everything that was written, it's written us to learn, that we shall have hope through the patience and comfort of the scriptures.

Joh. Obvious. 3. 19 I reprove and rebuke all those I hold dear. So be earnest and repent!

God has spoken to me before about Torp, and what is so striking is that everything fits. God spoke to me that he would delete everything he had written about me so I had to copy what I wanted for the future. And everything else, that's right!

So be earnest and repent was the message of Jesus, it applies to us today more than any other. In Torp goes sins before Him, therefore, you or I would never think that possibly our hidden sins will find us.

1 Tim. 5. 24 Some people's sins are visible to everyone and going before them to judgment, in others they follow after.

Torp divorced, married a lady one time his first wife as God's word skier either he should have reconciled themselves with or lived alone. Torp and peers do not understand that there is true repentance and fruits out of our lives that are more important and more to God than anything else.

The lesson Torp's really very simple, clear and biblical. Deliver a not for the Christian message itself, then have nothing on a lectern or other places to visit. We ourselves are the best and the most important factor that the Christian message to be true and real for God's purpose. Here is the word of God is clear:

Pastor Torp saves the best and second best, just like the apostate King Saul. The only remedy for Torp is not that he refrains of some television and radio appearances, or other appearances. But from ABSOLTT ALL!

This writing Torp on his blog, it sounds so good and pious, but it is directly carnal and here is a man who lives in blatant adultery therefore has zero to do "the Lord."

Quote Pastor Torp: Spokesman for the NHA Didrik Søderlind engaged at Minerva Networks for bringing me into silence, otherwise in full agreement with Espen Ottosen & Co. "Even if Jan Aage Torp is about as representative of Norwegian Christians Ubaydullah Hussain and his Prophet Umma is Norwegian Muslims, he always makes sure to create conflict," writes Søderlind at Minerva Networks. Most often I answer no media immediately call me (end of quote).

Torp would not answer yes and no as appropriate, but constant NO. He is unclean as King Uzziah was, therefore, he will sprawl "smitten" with him wherever he was allowed to go and come.

Will those Torp be removed by the Lord or will the "real" until Jesus comes?

Matt. 13. 24 He put before them another parable, saying: "The kingdom of heaven is like a man who sowed good seed in his field. 25 And while everyone was sleeping, his enemy came and sowed weeds among the wheat and went his way. 26 So when the plants came up and bore grain, then the tares also. 27 So the servants of the landowner, saying, 'Lord! Was it not you sow good seed in your field? How come when the weeds come from? '28' An enemy has done, 'he replied. The servants asked him, 'Do you want us to go and gather them?' 29 'No', he replied, 'for when gathering the weeds, you could simultaneously come to uproot the wheat. 30 Let both grow together until the harvest. And when it's harvest time I will say to the reapers, Gather together first the tares, and bind them in bundles to burn them. But gather the wheat into my barn. '"

Torp, Jan Hanvold, Åge Ålskjær, Ulf Ekman, Bernt André Torgussen and the other is that the weeds, it is difficult to remove it when they are so "cloaked" and "a" with the field (read God's church) that they are difficult and almost impossible to remove when they are unfortunately too many supporters within the church life. And the way they affect the congregation in some cases to become and be a tool of Satan and not God!

Sigmund Voll Ådnøy writing about this on our blog: Howard-Browne even wrote a personal message to me on Twitter after I "tweeted" open to him and confronted him with the failed prophecy. He believed that there was a lot I did not know, and it seemed that he examined believed that Hanvold had not done things the way he should. And / or as indicated on it that he thought that some other things were not good in the channel. It is a bit long time since Howard-Browne was in Norway or overt contact with Vision Norway. Maybe something happened between them, but it might be unfruitful to speculate heavily. The question may still be good. Whatever it is that both Howard-Brownes prophecy and other amusements, and Hanvold Howard-Browne and Hagin attitudes, to name a few, each of which is reason enough to stay far away from both. So it is with many charismatics and "trosbevegere" - some may have chosen healthy rejection of other toughs in the charismatic camp, but they are even still extreme toughs and false preachers. The fact that a charismatic preacher condemn another charismatic preacher (or stop nurturing touch) does not automatically mean that one has arrived at the absolutely right way and now to trust.

I have sometimes thought about those words connection. this: "A kingdom divided against itself can not stand." The charismatic kingdom of luxury preachers and credit providers can not endure forever. It may crumble more and more up inside thanks conflicts that as much can be about prestige and monetary interests of what is healthy and right theology and health.

Nevertheless, it may "always" exist power people and liars of charismatic species around, so it is perhaps best not to think that things are over. There are also different kinds of charismatics. Some are more humble than others, and "only" blind. Others take more mouth full and seem to suffer from grandiose ideas about himself as "the one who makes sure that the work of God will happen." (End of quote).

God's Word clearly says that such persons Apostle Torp and peers, it is only one thing to do. It is not to convert them, they will not repent when they were hardened and so fulfilled by a lie, and in some cases even demonic influences that keep them away as long as possible!

1 Tim. 1. 18 Timothy, my child, that's the mission I now surrender to you, according to the prophecies before is spoken to you. By them you fight the good fight 19 in faith and in good conscience. Some have swept aside their conscience and their faith has been shipwrecked. 20 Among them are Hymeneos and Alexander, whom I have delivered unto Satan, that they may be corrected as they scoff.

Faith of Torp is not only wrecked, it is so incredibly lashed to wreck (read new wife) that it is impossible to get woken up such, it is only and only God who can. When he and his peers are "lost" for God and the true Christian church when he does not know God. Something which he reveals by not dressing themselves in sackcloth and ashes and remove themselves from everything Kristen business to do!

2. Tim. 2. 25b. Because maybe God will once again give them to return, as they learn the truth. 26 When they wake of rapture and get out of the devil's snare, where they are held so they do his will.

Today Torp captured by Satan, said the Apostle Paul, they are trapped. They are in a rus and then the devil's snare, and also makes the devil Snes will. But the apostle Paul speaks of them, if possible, will one day learn the truth. Then they also should again be part of a true Christian repentance. Let us all hope and pray for it, but to think that we will be able to convert them, it is to think too much and wide. The only thing is to ask them and hand them over to Satan's custody so that they can learn to recognize that it is not easy to turn away from the Lord, but the Lord. We can hope and pray, but never something with heretics, those who live in sin or otherwise goes directly against God's word. Here is the writing clear:

2. Tim. 3. 4 Traitors, heady, opblåste, lovers of pleasure louder than God, 5 having a form of godliness, but denying its power - and these shall turn thee from. Titus 3 10 A man who gives himself a heresy, you will see from you, after you have admonished him once and again, 11 for you know he's perverse sins condemned of himself.

Notice what Scripture tells us to turn from them as they are, 'cause you know he's perverse sins condemned of himself. " They are perverse, what is it with one who is perverse? Eg. those drugs are perverse when they get a gold medal on false premises. So it is with Torp and peers. He does not live even as a true and genuine Christian, therefore he is perverse and such, one should not have anything to do with. But the turning in of he and like-minded!

Includes what is in the translation of 2011 about Torp and peers in Titus 3 11 For you know that such a man is astray. He sins and brings judgment upon himself (end of quote). It says that they are astray. It has recently rolled up that much of the sport which ran one with doping and those who won gold medals were not the brightest. But those who managed to Dopp with and conceal it. They were "best" and "won", but today when the truth has come out, it zig opposite. So it is to go against God's word and call himself a believer. One will sooner or later be overtaken by sin, if one does not repent in time! This applies to all of a name is Jan Kaare Christensen, Jan Aage Torp, Jan Kåre Hanvold or whatever you called or where one comes from, etc.

1. Cor. 9. 24 Know ye not that the stadium all participating in the race, but only one receives the prize? So run your race you win it! 25 All who participate in combat games, to deny everything. They do it to win a victory wreath that fades, we have to win that never fades. 26 I would not run without a goal. I'm not like a foe who turn in midair. 27 No, I'm fighting against myself and forces the body to obey, lest I who have preached to others, even to come up short.