Nr. 340: Muslims can cause us here in Norway greater challenges and problems than we like to think and belive! When should we as Christians wake up?

Muslims can cause us here in Norway greater challenges and problems than we like to think and belive! When should we as Christians wake up?

2 Genesis 34 10 He said, Behold, I will make a covenant: before all thy people's eyes, I will do marvels, things that have not been make in all the earth, or in anything nations, and all the people you live among will see Lord's work, how terrible it is, that I will do for you. 11 Keep to the commandments which I command you today! Behold, I will chase the Amorites, the Canaanites, Hittites, Perizzites and the Hivites and the Jebusites out of you. 12 Take thee care not to make a covenant with the inhabitants of the country you are going, lest they be a snare among you. 13 You shall tear down their altars, and I will smash your face supports, and ye shall hew down their Asherah-pictures [a]. 14 You shall not worship any foreign god: for the Lord whose name is Jealous, a jealous God. 15 Take thee care not to make a covenant with the inhabitants! For they will engage in idol worship and sacrifice to their gods, and when they would invite you, you will eat of their sacrifice.

Israel as a nation had clear instructions from God not to enter into covenant with foreign religions that were idolatry!

Israel would not enter into covenant with others who had a different God than believe them, believe there is much truth in this. We in Norway have been a Christian nation for 1000 years, now we are about to become so multicultural and other faiths that Christianity is increasingly losing ground. Muslims basically want to make Norway a Muslim, what? 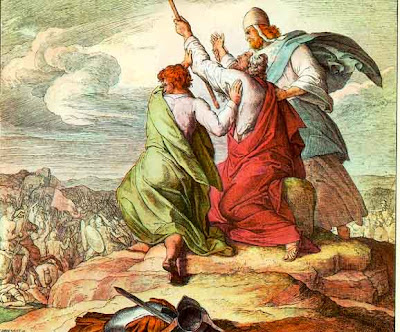 Confusion, equality and values ​​are things that one hears that hangs together. And that all are children of Abraham. The fact that Jews and Christians are children of Abraham, where we agree. Muslims are descendants of Ishmael was Abraham's illegitimate child, and has not been a true belief that Judaism and Christianity are. Now this is a very topic, and Christianity is wrong in many things. And Judaism has come to a halt if God has gone ahead and sent his own son to salvation, first for the Jew then for everyone else, us heathens. And Muslims and Jews teaches law of God, unlike the vast majority of Christians who believe in a triadegud which is completely against the Bible teach about the one true God who is Father. But here we shall try to shed light on Islam and what it has done and is going to do with us in Norway and the western world.

1) If one is Muslim, Christian, Jew, or what is or is not, then we are all created in God's image and Jesus died and rose for all. He is the propitiation for all people learn the writing, and I think we are. All of us are equal, if we think differently and have different skin color or nationality. Let this be very clear.

2) Islam began with Muhammad, but who was he? He married many women, it is unknown whether there were 9, 13 or more. He was a warrior and religious staples, no peace and love man who Jesus was. Muhammad was the antithesis to Moses, Jesus Christ, Martin Luther King Jr., Gandhi, Buddha and others. How can Muhammad be considered as a holy prophet?? It hangs not add up!! Around the year 570 AD was Amina, the young widow of Abdullah ibn Abd-al-Muttalib, a boy named Mohammed. The birth took place in the city of Mecca, a city of the Arab tribes in the area had long considered sacred. For the shrine Ka'aba stood there, and it was the goal of the annual pilgrimages. In other words, Mecca is the perfect city for a future prophet. Based on Mecca and Medina came the religion of Islam Muhammad that God (Allah) last and most important prophet, it was he who wrote the Quran which Muslims consider to be infallible and holy book. Muhammad killed and plundered so as to propagate Islam. Secondly, he could negotiate peace and then to break the signed peace pact, in which it was most expedient. He was, in our Christian and Western standards a barbarian, egoist, tyrant, religious pins, highway robber, sexgal, pedophile, pervert, bloated, psychopath and everything else that makes him a despot and sole ruler worse than Hitler, Mussolini, Stalin, and most other as we know that dictators and despots. This is the real and true story of Muhammad. I have to ask how God can God accept such a man as a holy prophet? It all sounds ridiculous. That Jesus is accepted as a holy prophet is quite right when he was perfectly good in everything.

3) It is claimed that Islam is a religion come out of Abraham. But the most important and largest in Judaism and Christianity, that one is saved by faith and not works. It does not exist in Islam. Judaism spoke of a coming Saviour and the Christian looks back on a savior, while Islam teaches that one should follow the 5 pillars and thus hope for a salvation from the destruction. Today, so learn as they learn not about annihilation that Muhammad did and as it says in the Quran, but an eternally burning hell Katolikere and unfortunately the vast majority of Christians do as well. God's word speaks of salvation by faith, not works. While Islam speaks to follow the five pillars as a way to salvation and eternal bliss. Bible: Eph. 2. 8 For by grace are ye saved through faith, and that not of yourselves: it is God's gift. Islam: profession of faith, prayer, fasting, pilgrimage and charity.

4) Islam teaches total submission. From Wikipedia: The root of the word "Islam" is the Arabic root SLM trikonsonantiske (س - ل - م, Sin-Lam-Mim), an Arabic morpheme whose basic meaning is "safety" / "peace". A derivation of this root is the verb "Aslam," which means "to accept" / "to surrender" / "to submit to." Islam is a "verbal noun" derives from the verb "Aslam" and literally means "acceptance" / "surrender" / "submission". In this context of acceptance, surrender and submission to Allah. (End of quote). Islam is a monotheistic lovreligion that requires total submission to Allah. Prophet Muhammad was also a lawyer, political leader and commander. It is the political and legal in Islam that makes it to something completely different than other religions, including Christianity. Islam is more of a total and totalitarian ideology than a religion.

5) Today's Muslims are ruled by imams who in turn is controlled by spirits that are not from God. 1 Tim. 4. 1. But the Spirit is saying, in clear words that in the coming times will anyone fall from the faith, as they hold themselves to seducing spirits and doctrines of devils 2 at the hypocrisy of false teachers, who are stigmatized in their own conscience, The imams are controlled by seducing spirits and adhere to the doctrines of demons. The surest sign and the certainty of this is that they do not learn directly about Jesus. Jesus is a prophet for the Muslims who are under Muhammad and that one can not assume that those who died for our sins and rose for our justification. Jesus in Islam only one of many prophets and it is not scriptural Jesus, but another Jesus, another spirit and not the gospel they stand for. 2 Cor. 11. 4 For if one comes to you and preaches another Jesus, whom we have not preached, or I receive a different spirit, which I no sooner received, or another gospel, which ye have received before, then I would like stand it! The imams of most Muslims, a learned person that they put their little bit more, faith, and that govern the whole of the Muslim movement in essence. When they are false teachers at the most crucial point of all points, and remains the false prophets, wolves in sheep's clothing as a must and should warn against. They think they have more than others, but in reality it is the false teacher with a false doctrine. They are also questionable on several points when they have political power and not only spiritual influence. Islam is not only a spiritual movement, but a political movement that requires submission of all areas in all people's lives. It is sinister and evil that they can operate freely and act as brash and bold as they do here in Norway without being contradicted by and large it all. This makes Norway's mandate for Muslims and Islam. They should be contradicted and of course do not have the government subsidize and otherwise, is and will remain in the long run a snare, and the case for Norway as a nation.

6) Islam is oppressive to women. The fact that Islam is oppressive to women we see on several fronts. In mosques, women are in a special section with the children. The man can have up to four wives in Islam and she should wear the veil even if it is not in the Koran. With it says in the Hadith. This is from Wikipedia about the Hadith (Arabic: الحديث - al-ḥadīθ (story, review, saga); al. الأحاديث - al-'āḥādīθ or الحدثان - al-ḥidθān) is within Islam stories about the Prophet Muhammad said and did. The word Hadith means speech, minutes or report. Together with the Qur'an Hadith is regarded as the main source of Islamic jurisprudence (fiqh), and the Quran and Hadith is therefore referred to collectively as usul al-fiqh, "law roots." A hadith consists of two parts: the isnad and matn. Isnad is a testimony to the hadith provenance or authenticity, and render the range of credible witnesses who have passed on the statement until the write-down. Matn is at the core, profetutsagnet. Traditionally, in the earliest collections were isnad quoted in several stages; Eventually isnad usually shortened and mentions only the first, original witness. After each hadith is rendered as a rule, the collections text was first written down, and how this editor rated the authenticity of the surrender. (End of quote). Hadith thus be greater emphasis on a Quran itself, just like Mormons put more emphasis on mormonsbok than the Bible, they also allow four wives that one can have at one time. In the Protestant Christianity also allows x number of women today, but one should have one at a time. Talk about confusion of Babel and similarities!

Final Comment: This is the first article about Muslims. There will be more about this very extensive and somewhat difficult and delicate subject.