Nr. 343: Should we worship or pray to Jesus in the same way as the Father?

Should we worship or pray to Jesus in the same way as the Father?

The disciples turned to Jesus for everything, think the same applies to us today and we expect and believe that He hears us and gives us what we need for the spirit, soul and body. When we come to the New Jerusalem, we will worship the Lamb teaches writing and we'll sing and shout something we can and should begin already here on earth and in the church: "Worthy is the Lamb that was slain, worthy to receive all power and wealth, wisdom and strength, honor and glory and thank you! " Jesus himself sang hymns and loved it, should not we also make and practice it? 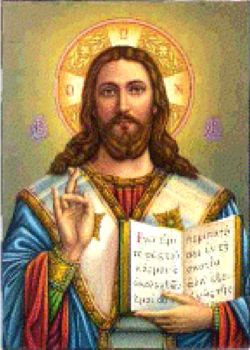 Matt. 28. 17 And when they saw him they worshiped him: but some doubted. Rooms. 10. 13 for everyone who calls on the Lord's name shall be saved.

We should and can not pray to Jesus on a par with the Father as Jesus is not the same "level" with the Father. Jesus said it himself in John. AD 10 29a My Father, which gave them me is greater than all.

We can not pray or worship of the Holy Spirit, but Jesus!

By virtue of the fact that Jesus has shown us who God is and that he has served his sin on Calvary, which no one else could and would. So what he has done on Calvary so great and unique that we can simply never do anything except to worship him and he makes intercession for us believers within its our Father, it is also good enough reason to pray to him. We have fellowship with the Father and son learn the writing, then we must also talk with Jesus as we do with the Father or the Word of God seems contradictory. There are secrets Tucked away present in the font, we must try to understand what God meant by his words. And it says that we shall call upon the Lord's name is Jesus and we shall be saved, it is not to pray??? Yes, of course.

This is from my commentaries Hebrews 7 24 But Jesus has a priesthood that does not end, because he remains forever. Here we just take our hat off to God the very good and wonderful he has done so. We need to break out that Paul in Rom. 11 when one sees the Lord's way and inscrutable wisdom. Rom.11. 33 Oh, the depth of wealth and wisdom and knowledge of God! How unsearchable his judgments, and how unfathomable His ways! 34 Who knew the Lord's mind, or who was his counselor? 35 Who gave him something first, so he should get consideration? 36 From him and through him and to him are all things. Him be glory forever! Amen. 25 Therefore He is able to save completely those who come to God through him, because he always lives to intercede for them. The fact that Jesus died and rose again the foundation of his ongoing ministry. His biggest and most important service for us is that he prays for the believer and advocate within its Father. That this is so little taught about is a tragedy. John. AD 17 9 I pray for them. I pray not for the world, but for those you have given me, for they are yours. 1. John. b 2 1. My children, that I write unto you that ye shall not sin. But if anyone sins, we have an advocate with the Father, Jesus Christ the righteous. 26 Yes, such a high priest was what we had to have: holy, good and pure, separated from sinners and exalted above the heavens. We read about the great Day of Atonement in the 3rd Genesis 16 that the high priest also have to make atonement for their sin. v. 11 When Aaron leads his own sin offering bull and make atonement for himself and his household, he shall kill the bull. We may never find some of these weaknesses with Jesus, even Satan had to give up here. John. AD 14 30 I shall not say much to you after this, the prince of this world comes. He has no right over me. 27 He does not, like other priests, to offer up sacrifices daily, first for his own and then for the people's sins. The victim, he has carried out once for all when he sacrificed himself. The main purpose of Jesus' ministry and life was not just a survivor learn. Nor heal, exorcise demons and rebuke the Pharisees and the scribes. But he suffered and died. Markus 9 30 They got up there and let the road through Galilee. He did not want anyone to know it, 31 because he was busy teaching his disciples. He said to them: "Son of man shall be betrayed into the hands of men, and they shall kill him, and three days after he shall arise." 32 This did not, and they were afraid to ask him. 28 They act as inserts to the chief priests, the poor people. But the word that was confirmed with an oath, which came later than the law, inserts the Son, who has reached perfection forever. Jesus' life and work was completely different then prior sentences were totally different. The law was like to walk with crutches. A person can not carry its own weight will not see how weak one is before one tries to do something. So it is with those who will try to follow the law, it is doomed to more of a try. But both Jesus removes our sin and gives us the opportunity to please God by his Spirit is seen and run rules are found in the New Testament writings. John. e 3 31 He that cometh from above is above all. It comes from the earth, the earth is earthly and speaks. He who comes from heaven is above all.

Final Comment: For my part, my prayers directed primarily against God the Father, and my worship. But there are times and moments that I pray ten and worship Jesus, when he is appreciated! Has been a few times up in difficult situations and then I automatically invoked the name of Jesus. Not later than 1 week ago I was in a waterfall in Telemark and lost grip and fell into the waterfall. Automatically, I cried, "Jesus help me." And he helped me on a wonderful show that I did as a small miracle to turn me around and was prevented from hurting me a lot about I fell down some lodrett meters. Everything went well blessed be the Lord's name. Pray to God in Jesus' name, it is the prayer of the New Testament recommends, but it is also good and right to pray and worship Jesus. What we do here in time and when we come home to the New Jerusalem!