Nr. 326: Pastor, juggler and entertainer Egil Svartdahl wanted 10 mosques in the city of Oslo, he has been complied with their desires more than he could have wanted!

Pastor, juggler and entertainer Egil Svartdahl wanted 10 mosques in the city of Oslo, he has been complied with their desires more than he could have wanted!

Pastor Egil Svartdahl has fronted many roles, the best he has had success with was arguably playing the janitor at the top of the heath misled and deceived Pentecostal youth in the 80's and 90's, when he was in his element. I will not go as far to say that Black Dahl is a false prophet, but he is not far away. That he is, according to Christian newspapers, the most widely used dating speak in Christian Norway in 2012 shows that Christianity in Norway is seduced, apostate, lukewarm, out of spiritual direction and directed by Satan more than God! 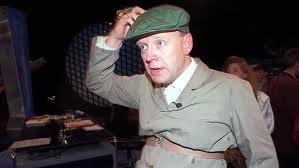 5. Genesis 7 1. When the Lord your God brings you to the land you are entering and to lay under you, he will drive out many nations for you: the Hittites, Girgashites, Amorites, Canaanites, Perizzites, Hivites and Jebusites, seven nations greater and stronger than you. 2 When the Lord your God has delivered them to you and you defeat them, turn them with a curse. You have no covenant with them nor show mercy to them. 3 You must not associate family ties with them, do not give your daughter to his son and take his daughter to wife for your son. 4 For they will get your children to turn away from me, and serve other gods. Then the Lord's anger will burn against you, and he will soon destroy you. 5 But thus shall ye do to them: Break down their altars, smash pillars, cut down the Asherah poles and burn their idols. 6 For you are a people holy to the Lord your God. Among all the peoples of the earth the Lord your God has chosen you to be his people, his precious property. 2. Genesis 34 10 Then the Lord said: Now I will make a covenant. In the presence of all your people I will do wondrous works that have never been done anywhere on earth or among any nation. All of the people you live among will see how scary it is, the work that I the Lord will do with you. 11 Take good care of what I command you today! Behold, I will drive out before you the Amorites, Canaanites, Hittites, * • Girgashites, Perizzites, Hivites and Jebusites. 12 Beware of covenant with the inhabitants of the country you are going, so they do not catch you in a trap. 13 You shall tear down their altars and smash the stone pillars and Asherah poles ye shall hew down. 14 You shall not worship any other god, for the Lord's name is Jealous, he is a jealous God. 15 Thou shalt make no covenant with the inhabitants of the land! For those engaged in fornication with their gods and sacrifice to them. If they invite you, you're going to eat their victims. 16 Do you take wives for your sons among their daughters, then their daughters commit fornication with their gods and make your sons to commit adultery with their gods. 17 You shall not make for yourself molded gods. Ezra 9 My God! I am ashamed and embarrassed to lift his face to you, my God! For our sins are so many that they have grown over our heads and our guilt is so great that it reaches to heaven. 7 From the days of our fathers, and until now, our guilt has been great. Because of our sins, we and our kings and priests given into the hands of kings, to the sword, captivity, pillage and shame, as it is today. 8 But now the Lord our God for a short time shown us favor. He has left a residue of us get away and have attached the peg for us in his holy place. Our God has been our eyes to shine and has given us a little strength in our slavery. 9 For even if we are slaves, our God forsaken us in our bondage, but he has been the Persian kings to show us favor, so we got to travel to the house of our God of the ruins. And he gave us a guard of Judah and Jerusalem. 10 But now, what shall we say after this, our God? For we have forsaken thy commandments, 11 you gave through your servants the prophets: "The country that you are entering to possess is an unclean land due to filth to the peoples of the lands around. They filled it with heinous acts and made it unclean from end to end. 12 Therefore you must not give away their daughters to the sons of others. You must not let the others take their sons daughters in marriage. And you must never do anything to promote their peace and welfare. Then you will be strong and eat all the good of the country, and ye shall let your children get possession of it forever. "13 In spite of all that has happened to us because of our evil deeds and our great guilt, you, our God, yet punished us less than our sins deserve, and you have left a remnant of us escape. 14 Should we again break your commands and associate family ties with the people who do such heinous acts? Will you not be so angry that you destroy us, so that none is left or escape? 15 O Lord God of Israel, thou art fair. We are a remnant who have escaped to this day. See, here we are in your presence with us. But this can not be left for you.

Egil Svartdahl wanted 10 mosques on local TV here in Oslo in 1990. He has over 20 years later had their wishes fulfilled more than he could have dreamed and wished for. The reason for this was that we would get a free pass Christians and Christians to build God's house across the Muslim world. How spiritually blind and deceived can be I have to ask myself? The truth is that Muslims and Muslim countries are more intolerant and harder against the Christians and Israel than ever in the whole. While we in the Western world and especially in the Protestant countries, allowing them to keep on building mosques of our tax money. At the same time we send billions to Palestinians without the need to document a single penny of what money goes to. This is Svartdahl to open up by their liberal attitudes and at the same time, he has zero to get involved in the spiritual area. He appears as a showman and many in the Christian world follows him and applaud. Is it any wonder that the Norwegian Christianity is down for the count? No and again no one!

Egil Dahl Black has gone in tandem with the late Aril Edvardsen false prophet that was quite beyond when it came to the Muslims. He suggested including that the first Christians were praising Allah and many other things. This is to tackle the likes of Muslims is not easy. But in the OT to Israel, God was aware that they should not be allowed to build their houses of worship of when they do not worship the living God when they reject Jesus as Savior, Lord and mediator between us and God.

1. Tim. 2. 4 who desires all men to be saved and come to the knowledge of the truth. 5 For there is one God and one mediator between them before God and man, the man Christ Jesus, 6 who gave himself a ransom for all, a testimony of his time,

There are now more than 10 mosques in Oslo, but how many house of God has been raised in Muslim countries? Preferably, they have removed the Christian house of God.

The truth is that there are fewer and fewer evangelical believers who live freely and well in the Muslim countries. While here in Norway and other Protestant countries build more mosques. Svartdahl is held to be one of the foremost Christian leader and is now the most widely used speaker among Christian Norway. As I see it, it's Laodicean condition that is prevalent among the large number of evangelical believers here in Norway and elsewhere in the Protestant countries.

From my commentaries Revelation 3 14 Write to the angel of the church in Laodicea: This he says the Amen, the faithful and true witness, the beginning of God's creation:

Is this done in love? How is the love we read about in the 1st Kor. 13? v. 6 It does not rejoice in iniquity, but rejoices in the truth. It had to be serious and must take it into the message that was it. 20 Behold, I stand at the door and knock. If anyone hears my voice and opens the door, I will come in to him and eat with him, and he with me. The entire congregation was very difficult to accept the message because they wanted it scratched them in the ear. But it was, if possible, some understand that the church would take it to heart? They were able to experience the intimate fellowship and communion with Jesus again. 21 He who overcomes, to him will I sit with me on my throne, even as I also overcame and sat down with my Father on his throne. Again the Lord addressed himself to the victorious and who wish to follow him. Once saved, always saved is one of Satan's biggest lies. Salvation is something one must also grow and take care of. For those who overcome will one get the same position and position himself. We will sit with Christ in the heavenly. Eph. 2. 6 In Christ Jesus he raised us up from death with him and put us in heaven with him. 22 He who has ears, hear what the Spirit says to the churches!