From the Book of Judah 12 These are the shameful marks of your love-meals; waterless clouds driven by the wind; trees, bare as if in the fall, barren, twice dead, uprooted; 13 wild sea-strings that shame their own shame; astray stars, for whom the night of darkness is ready for ever.
The fact is that "serving" the Lord, but not living in repentance, is many times worse for God than even being a God-defender who does justice to himself. But the best thing is to live by the word of God and believe in me and God as Jesus said it.
Picture of Lucifer or the Light Angel as he once was. Today he transforms himself into one, but is the angel of darkness. 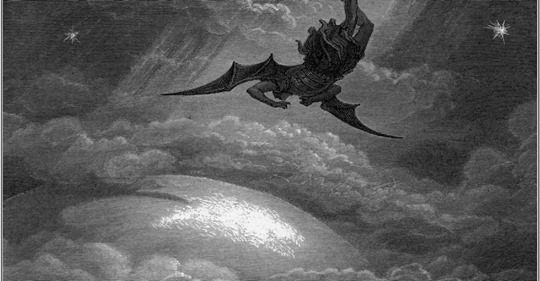 Although there are two outputs of life, either eternal life in with God forever. Or to get lost where one is wiped out in the Lake of Fire with all the evil creatures like Satan, the Antichrist, the false prophet, the demon and the fallen angels.

Acts 19. 11 And extraordinary works of God did by the hands of Paul, 12 so that they even took sweat-cloths or aprons which he had worn, and bore to the sick, and the sickness departed from them, and the evil spirits departed from them. 13 But some of the Jewish spirit-men who were about to take the name of the Lord Jesus over those who had evil spirits, said, "I exhort you by the Jesus whom Paul preaches. 14 There were seven sons of Skevas, a Jewish high priest, seven in the number, who did this. 15 But the evil spirit answered them, Jesus I know, and Paul I know; but you, who are you? 16 And the man in whom the evil spirit was, leaped upon them, and won over them both, and overcame them, that they should flee naked and wounded out of the house.

We see the same with Jesus, who had power and authority over the entire spiritual world, even the angels.

Matt. 26. 52 Then Jesus said to him, Put your sword in the sheath. for all who take the sword shall fall by the sword. 53 Or do you not think that I can pray at this time to my Father, and he would send me more than twelve legions of angels?

Notice that Jesus was not fearful when they seized him, just as the others were. Not least the apostle Peter, who grabbed the sword and cut off one's ear. What does Jesus say? That a legion was a force of 5 to 6,000 men, who had others left behind. In other words, Jesus could easily have received 60 - 70,000 angels who would have easily delivered him from the cross and the Roman soldiers. This will happen when Jesus saves Israel at the Armageddon battle, then there will be angels and us saints (Christians) with Him.

Let's take the negative side, that is, there are also levels in "serving" the evil. But the Bible is actually very clear about this, so clear that it is almost at the limit of what one wants and wants to convey. It's that all people are not "spirit-neutral". But belongs to either God or Satan, lying or dark. Either we live in the kingdom of the beloved Son of God, or we are under the wrath of God. Includes two verses that say this.

Joh.e. 36 Whoever believes in the Son has eternal life; but whosoever will not believe in the Son shall not see life, but the wrath of God shall be upon him.

Kol. 1:13 He who delivered us from the power of darkness, and put us into the kingdom of his beloved Son,

Who is the one who "serves" Satan first and foremost? We should not go into this in depth, but it is important to be aware. It is not always those who invoke the Christian name that bear it. Who did Jesus have the most trouble with? The poor, widows and ordinary people? No, on the contrary, they were religious people of the time.
Who has e.g. I've had the most trouble in recent years?
There are people who should be in the good servants, such as preachers and government officials. In other words, it tells that many times, name Christians and government figures are the worst to stand up to God and be in the violence of the Evil One.

We also read from Ap.gj. 19 about some sons of Skevas, a Jewish high priest, seven in the number who did this. They were "worse" than the Gentiles in wanting to imitate Paul, but they were obviously not born again.

Just imagine what the false Pastor and fool Apostle Jan Aage Torp did to trick the police and the courts to get a verdict on me when Torp hated my preaching of God's word. Not least my proclamation of remarriage, then as a Christian brother if he had been. Then he had never notified me, since God's word speaks plainly about notifying brothers and sisters is not something we as believers should do. Then it is better to suffer a loss rather the scripture says!
It is not difficult to tell Torp here that he is a servant of Satan, since the word of God clearly states that one should not remarry after a divorce. And reporting brothers and sisters in the Lord is also unbiblical. The man is a "drama queen" of rank.

Now let's focus in the next article on what it means to serve the Lord. And that we can look at depths and nuances and walk with the Lord. In many ways, one can say, to make the most of their Christian life.
Here we have also focused on the fact that there is a divide on us humans. There is a difference between whether we have received salvation or not. And it is also depth and possible to be a "devoted" servant of evil as well as of good!
Lagt inn av Jan Kåre Christensen kl. 06:53