No. 1462: The truth is that the public administration is in deep crisis here in Norway. our case and that the human rights court in Strasbourg is running a number of cases against Norway, which testifies that this is not a one-off case!

No. 1462:
The truth is that the public administration is in deep crisis here in Norway. our case and that the human rights court in Strasbourg is running a number of cases against Norway, which testifies that this is not a one-off case!

Picture of our wall as PBE we want to demolish. They believe it is too far off the road and the property should be traced back to the way it was before. Before that, our sloped plot lay farther out than what our wall does. Here we meet people who are full of lies and then act to the degree unrealistic and pathetic.

Now we have a wall that allows the fill mass to stay on our property, and we were fortunate enough to build on an old wall without searching.
We have done as PBE said, and everything is just fine and good, now.
Much better than we had it, the roadway is also "bigger" now than before.
We are going to tear down, here are people who are so lying and acting outright quarrelsome and difficult, even if they call themselves case managers, unit leaders, group leaders and others.
Unfortunately, even if the whole case is based on lies, fabricated problems and other things that contradict their decision and the way in which they apply laws and regulations, they run into each other.

We have infinitely greater honesty and truthfulness than the public, so we have also revealed them time and time again that they "know everything", but their folly is only becoming more and more apparent to everyone!

2 Tim. 3. 9 But they shall not prosper; for their disbelief shall be revealed to all, as also they were.

For anyone and everyone who intervenes in this matter, only their misunderstanding and folly will be revealed more and more. They want us to demolish a wall that works very well, and before we built the wall it was more muddy and the slope lay more in the roadway than it is with our wall.
Neighbor Roar Telje complained that the brewing car would not arrive because our wall, but there are no places in Oslo city that the brewing car arrives as easily as with us. The whole chorus against us has been revealed as a bunch of liars and who are just looking to make nausea and anxiety! 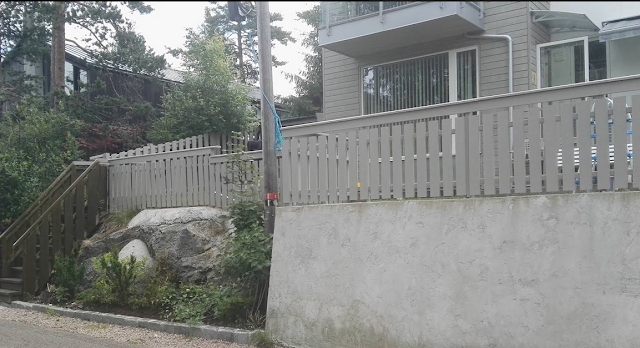 What we experience with PBE and in fact the entire public administration acting in such a way, that one must say that they do not proceed in a fair and reasonable way is unfortunately not a one-off case!

I also have my question marks with writing as I do!

One of them is that after all, having lived 50 years of my 55 years in Norway, all of Norway is a country with wonderful people and a fantastic nature and freedom!

But why and how can it be as wrong as it sometimes does. We saw, for example. now in the Human Rights Court in Strasbourg where Norway was convicted. This was a child welfare case, but the similarities to our case are strikingly similar.
One puts oneself on a pedestal, high above others. Attacking than this, it is something that no one else has anything to do with. The truth is what the state and the public have determined.

We read here about the verdict
In the Strand Lobben case, the judgment of the EMD particularly attacks the decision-making process up to the final adoption decision. The child welfare service is criticized for its lack of efforts in order to bring about a possible return and for how togetherness was carried out. The get-togethers had not been designed to promote close contact between mother and child, in light of possible reversion, but only as a goal was for the child to gain "knowledge" of their biological origin.

The verdict also raises sharp criticism that her mother's care skills were not re-examined after she had a new child without demonstrated concerns about mother's ability to care. The Child Welfare Service had not made any real attempts to improve the poor connection between the mother and the child.
(quote at the end.)

Here we see that it was the very process that Norway "stroked" on. What is this really?

Lack of maturity, that's what it says. In many ways, it is the same in the case between us and the City of Oslo / Norwegian State that they appear extremely clumsy, unprofessional, rational, immature and then one can say that one is not worth the task.

I played football until I was 40 years old.

It reminds me that Norway acts as if they are engaged in a sport other than football. It's like playing handball, or playing athletics, but not soccer.
Such is indeed the whole of public Norway.

I am Danish, as I said, and I think this could not have happened so easily in Denmark as in Norway. The reason for this is probably that there is a lack of maturity here in Norway that is noticeable!

Let me take an example of really what low plane PBE is moving on here in Oslo.

Similar issues where wall placement is an issue Unlawfulness case 201717539 in Tamburveien 10 also a wall has been erected on a regulated road surface. This cannot be approved either, and will also have to be removed through follow-up in the illegality case.

I answer them and have never answered this:

Eg. then I got a reply from Nils-Henrik Henningstad that there were several others who had to demolish walls etc. I went into the cases he brought with, and then the fire and rescue agencies and other agencies were in to impose demolition. I pointed this out and told us it was also an advantage for fire and ambulance, as well as other agencies as we have built. Did I get an answer then? Never, such is PBE, just full of cheating and lack of good folk to answer things.
(quote at the end.)

Comparing this case with ours only shows that you have not understood any of the world's things.
Here is the fire and rescue agency inside, and with us it is the opposite!
Blue. when our daughter became acutely ill they had to use our stairs which we have been ordered to tear down, which testifies that their decision is completely rigid and meaningless!

Final Comment:
I just find that there is something very little mature and one moves on a plane that testifies that they are not suited to the task they are assigned to. In other words, they lack competence and act proud and arrogant!
Unfortunately, this is something that, in part, permeates the entire public Norway.
Lagt inn av Jan Kåre Christensen kl. 13:45