No. 1624: Jan Aage Torp makes the case between me and him as he has the "ultimate" truth, but reality is something completely different!

No. 1624:Jan Aage Torp makes the case between me and him as he has the "ultimate" truth, but reality is something completely different!

Acts 23 Then Paul stuck to the council, saying, Brethren! With all good conscience, I have led my life to God until this day.24. 16 Therefore, I always make an effort to have an unconscious conscience for God and people.

Through all the things I have written and spoken, I have an unconscious and good conscience when I know that the case against me is nothing more than Christian persecution.Screenshot of Torps writes against me and the heavenly blog. 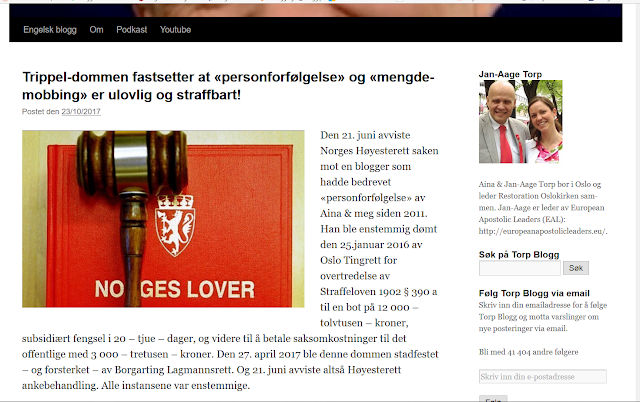 I will try to make the most objective presentation of what Jan Aage Torp puts out online as if he has the "ultimate" truth.Now I will not go through everything Torp writes, but for example. His last article where he writes about the feud between me and his.Torp writes as I reproduce something of here:https://torpblog.wordpress.com/2017/10/23/trippel-dommen-fastsetter-at-personforfolgelse-og-mengde-mobbing-er-ulovlig-og-straffbart/The Trippel ruling states that "persecution" and "crowd-bullying" are illegal and punishable!On 21 June, the Norwegian Supreme Court rejected the case against a blogger who had been "persecuted" by Aina & me since 2011. He was unanimously convicted on the 25th of January 2016 by Oslo Tingrett for violation of the Penal Code 1902, section 390a, to a fine of 12,000 - twelve thousand kroner, or, alternatively, prison for 20 - twenty days, and further to pay costs to the public by 3,000 - three thousand NOK. On 27 April 2017, this verdict was confirmed - and reinforced - by Borgarting Lagmannsrett. On 21 June, the Supreme Court rejected appeal proceedings. All the bodies were unanimous.The debt issue, the evidence and the law enforcement by the Police and the Public Prosecutor have always been waterproof.Both the term "persecution of persecution" and "bullying-bullying" was introduced in the statements of all 3 judicial authorities, for which we are grateful.We have learned that we will no longer accept bullying, harassment, and persecution of fake actors - neither in 1) anti-Christian forums, or 2) announcements in NRK, TV2, VG, Dagbladet, Our Country & other publishers and media even if untruths and bullying are conducted "indirectly". Persecution, frequent harassment and bullying, and invasion of the private sphere, will be reported and judged by Norwegian law. No one should ever take the chance that we let this pass. Media and publishers must adhere to the decency - and the rule of law.Oslo Tingrett, Borgarting Lagmannsrett and the Norwegian Supreme Court have definitely ruled - once and for all - that persecution is not allowed! The standard is set.(quote ending).1.) Call it a triple-dom is pretty sought after. It's actually misleading to call it a triple-dom. In Oslo district court there was a culprit based on which was somewhat debated. What was most debated was probably the use of law. Something like Meling held tight. When the verdict came, I was actually put out. What had not been the subject of discussion in court, the amount of writings. I was convicted of this, it was without doubt a clear justification that one may be convicted of something that one is not charged with and that has not been the subject of discussion in the court talks.2.) The appeal to Borgarting Court of Appeal was essentially purely wrongful use of law. This is what you can hear here in Borgarting Court of Appeal. There was law enforcement. Look here:https://www.youtube.com/watch?v=AnLmUHtMdB8&t=3834sThe amount that I was sentenced to in Oslo district court claims I am here completely, hear from Borgarting Court of Appeal:Even after this I was judged, and still this has not been the subject of discussion. Neither in Oslo District Court nor in Borgarting Court of Appeal. Then one must say that we are in the wrong judgment because it has not been discussed what I have been convicted of.3.) The appeal to the Norwegian Supreme Court was a sad affair.Here is the letter written: http://blog.janchristensen.net/2017/08/nr-2048-advokat-brynjar-meling-sitt.htmlHowever, it was not addressed and did not argue why they would not treat this. To act like Torp and call it a 3 x 3 triple room will actually distort the truth.4.) Jan Aage Torp does not mention that it is now for 2 months. since sent to Strasbourg in France where this verdict and case will be finally settled.Only now is the matter in its decisive phase. Everything before this has been as an impediment to what will come down here in France.The Strasbourg court is responsible for all courts in Norway. And what will be the outcome here will be the FINAL!

5.) Jan Aage Torp repeats himself this with "crowd-bullying", this is partly driving readers behind the light when he fully proved does not bring the facts. Agree that there has been a lot of crowd, but that's because Torp himself and his allies have written about me, I count five times more than I've written. And that the police have not investigated anything else and produced what I have written. In other words, the police have also done such a miserable job against me. I would like to compare it with a judgment that could have been in Congo or another country that we consider as undemocratic and which we do not want to compare ourselves with.6.) I actually think what Even Gran wrote about the fake Smyrna blog fits. He has understood why the police are taking me, but nobody else. That's because they've done a mildly miserable job. Gran writes:"Nothing to shout hurts for and there is the matter. The blog that last week attracted many flirting for striking and funny Christianity, who even managed to trick at least one big newspaper, is also ... yes, should we go as far as saying ... a mob blog?Yes, I actually think so. The ridicule, humor, irony and sarcasm used to hit Christensen and the wife in some of the articles are infam. It must also be noted that Christensen, in his monomental condemnation of things that in his mind is not "biblical", is a single victim.The lesson may be that if you want to hang out someone online, you should not, like Christensen, go out under the full name, call out named persons and call them "horebukker", "old pigs" and such. Then you are easy to take and can quickly end up with a judgment in court.Then it's much better to protect yourself from a subtle interpretation of smart humor, satire, sarcasm and irony. That's something that every effective bully knows. Do not pick up people in the schoolyard. Cut a ugly ugly as the victim can not fault and say "you do not understand anything" if you are confronted. Also come with small regular stitches that are difficult to confront, but nevertheless hit without mercy. And if you use the web, you can enjoy the usability of anonymity.In other words, "Smyrna church Oslo" and "Arne Ulf Breen" mean even more than a mobly higher level than Christensen. But I definitely do not think it deserves anything more than such a sarcastic congratulations from my side.Are you so clever that you can write such fun and striking satire as part of what we find at "Smyrna Menighet Oslo", then you should also be so clever that you do not let go of harassing people. "7.) Also, Torp, in the name of Reason, had received several things here. That in the actual review and the sentence was not the amount mentioned. This was something that came into the verdict of Oslo District Court, which nobody was aware of when it was not raised in court that the amount was of crucial importance. I got so far I do not remember any questions about this with quantity. And at least it was not discussed as a matter of fact.8.) The case has been sent to Strasbourg, which will be final and decisive instance. What will be the outcome there will be the final result. This would have mentioned Torp in the name of reason, now I mean, or he leads the readers behind the light!

Final Comment:
Of course it's easy to be upstairs, so Torp gives an impression of it.But soon, then, he is being treated unfairly, what then?I would, however, take other people's feelings, opinions and views far more in my mind. But it may be because Torp is simply a psychopath that he can not and can, I think so much.But others, they are unfortunately not much better!I think that's sad.If I had or had a fair and fair trial I had congratulated Torp on winning. Do not have any trouble to treat others a victory, but not here when it's actually a justice word!It is sad that he to those degrees does not try to produce this case also seen from my side.In fact, for the first time in 4-5 years, he said something to my advantage and objectively when asked by Even Gran regarding the fake Smyrna blog following:"Torp understands that Christensen reacts to some of what is there, saying that he had reacted very strongly if someone had written an anonymous blog that hung him the same way."

This was actually well done by Torp, that he realized that others than him were hit. Torp is after all self-inflicted, who has chosen to live a life of horror. To me and to others, it is the Christian prosecution that has been completely innocent in this!