No. 703: Dr. Rodney Howard Browne banned Vision Norway since 2011 when he preached against Hanvold many divorce and subsequent remarriage!

Dr. Rodney Howard Browne banned Vision Norway since 2011 when he preached against Hanvold many divorce and subsequent remarriage!

Rodney Howard Browne and his first and only wife Adonica unlike Hanvold living 100 % against the word of God and is otherwise the same glory theology that Dr. Rodney Howard Browne . But they can not reach cooperate when Howard Browne holds up what God's Word says about marriage - divorce and remarriage . That it is not permissible for believers to marry again after a break ! 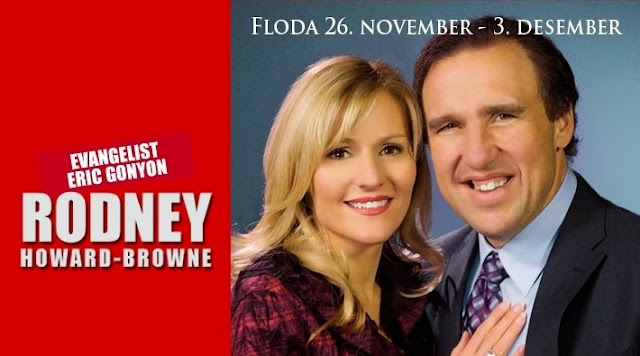 It is striking and very strange that Emanuel Minos and other Christians called leaders do not preach against remarriage as this is the most neglected truth and the greatest sin of omission that is in God's church today? !

" To hell with anyone who does not agree that I am re- married " .

John the Baptist lost his head preaching against Herod 's new marriage that was not right according to God's word. Something similar we are experiencing today among the so-called evangelicals that do not tolerate preaching against remarriage .

The result of it being boycotts, exclusion and obstruction .

Is the church today, the pillar and foundation when remarriage of both preachers and other Christians either accepted, defended or that those who warn against this experience exclusion , boycotts and no opportunity to preach the Bible teach about this ?

January Hanvold "spiritual mentor and role model " was Rodney Howard- Browne , belonging to religious movement and is known to proclaim the glory of theology. TV Vision Norway had for years sent several programs with Howard- Browne and other preachers in the same direction.

Got banned when he preached against remarriage !

Scriptures on marriage , divorce and remarriage are rarely preaching in our day . A few decades ago, divorce rare in the church. Now there is a huge avalanche of divorces and the need to take these biblical words up in preaching should be great.

But why preached it virtually does not and what happens to those who hear the word of God and teach that marriage is until death do us ? Instead, they have plenty of examples to look at the marriages that end in divorce . When Christian leaders , who many people look up to , stand , this strong negative examples.

1 Thessalonians 4.2 to 5 : " You know that the precepts we gave you by the Lord Jesus. For this is the will of God , your sanctification : Abstain from sexual immorality . Each of you should know how to possess his vessel in sanctification and honor, not in passionate lust like the heathen , who do not know God . "

Marriage, a type of Christ and the church :

Ephesians 5.31-32 : " Therefore shall a man leave his father and mother and cleave unto his wife: and they twain shall be one flesh . This is a great mystery - but I speak concerning Christ and the church . "

Diabolos is the devil's name in Greek, and means that the brand ! He hates what God has created . Loving , faithful marriages and families are split , leading MUCH grief and despair with it !

The world would look at us Christians and say, " See how they love one another ! " Our marriage would be a visible image of the love between Christ and His bride , the church.

You shall not commit adultery !

Matt 19.4-6 : " He answered and said, Have you not read that he who created them from the beginning made them male and female, and said , For this cause shall a man leave father and mother and cleave unto his wife: and they twain shall be one flesh ? So they are no longer two , but one flesh . Therefore what God has joined together, let not man separate . "

Mark 10,9 : " Therefore what God has joined together, let not man separate .

Paul writes as clear in 1 Corinthians 7:10-11, TLB : " And unto the married I command, yet not I , but the Lord : A wife must not separate from her husband . But she is separated from him , let her remain unmarried, or be reconciled to her husband . And a husband must not divorce his wife. "

We note that Paul refers to a word from the Lord. It is given only two options for the divorced wife, to remain unmarried or be reconciled to her husband .

The theory of the innocent party based on Matthew 19, 9 , where Jesus says: " But I say to you, whoever divorces his wife, except for marital unfaithfulness , and marries another , commits adultery . And whoever marries a divorced woman commits adultery . "

From this it is believed to have coverage that a man who is separated from his wife because she has committed adultery can remarry. But such an interpretation violates the parallel verses quoted above . True biblical interpretation has always been the guiding star that the clear words must illuminate the less clear, and in this case it is more clear verses that go against remarriage .

Small Bible knowledge , little teaching on topic and wrong guidance has meant that many unfortunately have ended up in tricky situations , far away from God's ways and will. But in Jesus there is forgiveness and reparation for those who repent and confess their sin !

Isaiah 1:18 : " Come let us reason together, saith the Lord. Though your sins be as scarlet , they shall be as white as snow , and though they be red like crimson , they shall be as wool . " Jesus said to the woman taken in adultery : " Go and sin no more! " She could therefore not continue as before , to live in sin ( adultery ) , but had to repent. So also must repent to be forgiven by God ( Apgj.3 , 19) . We can not live in sin as Christians , there is a big difference between living in sin and fall into sin.

Hebrews 13.4 : " Marriage is honorable in all , and the marriage bed be undefiled God will judge those who commit adultery and adultery. "

In many ways, things are about to be turned on its head. Those who live and preach after the Gospel encounters locked doors not only in the world but also in the congregation . And such obvious things that Hanvold closes its greatest role model there, overlooked by everyone. Why ? There are issues we take up in the Heavenly blog and you have the opportunity to comment and submit questions and will receive answers about everything that you write as long as it is spiritual Bible -related questions!