No. 708: Abortion priest Ludvig Nessa will be on TV Vision Norway to warn January Hanvold and others against remarriage!

Abortion priest Ludvig Nessa will be on TV Vision Norway to warn January Hanvold and others against remarriage!

According to Kjell Andersen from Kristiansand who runs the website Sokelys.com ( Spotlight) then Abort priest Ludvig Nessa will be on TV Vision Norway to warn January Hanvold and others against remarriage . Andersen says among other things : "I spoke with Nessa about exactly this , and when the church year texts touching theme ( remarriage ) will of course Nessa present what God's word says on the matter ."

Further, an excited Andersen , who appears to be both seduced and naive as follows: "After January Hanvold threw out the Word of Life from Vision Norway as Ulf Ekman converted to the Catholic Church earlier this year, the channel that is both loved and hated sent different program the transmission time heretic Ekman originally had . There was also this broadcast time in January Hanvold promised Ludvig Nessa and if things do not intersect the channel from the month of September start sending church services from Carmel. Thus, Ludvig Nessa have the opportunity to reach significantly more people with his uncompromising preaching of the Word of God . "

Photo of Dr. Rodney Howard Browne was banned Vision Norway since 2011 when he preached against Hanvold many divorce and subsequent remarriage . Ludvig Nessa should probably plan on the same treatment if he is to go on Hanvold TV channel for preaching against remarriage . Exciting it will be to see if he lives up to it as Andersen says he will do. 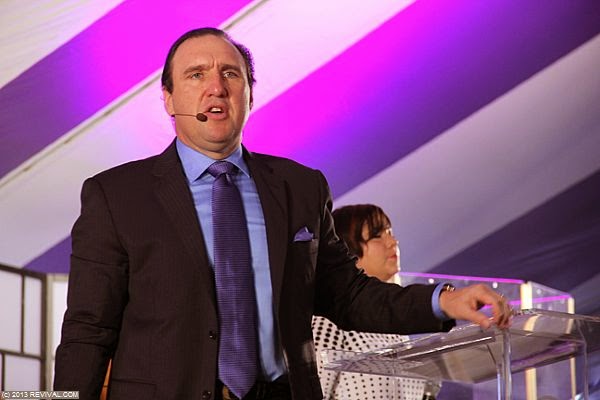 This is from the dispute between me and Mr. Andersen :

Me : Kjell Andersen writing : Jan Kåre Christensen . You know exactly that I believe remarriage is a violation of God's will , you know well that we rightly exhorts believers who walk in sin to turn from his ways and repent . The same rule also applies to non-believers or unbelievers , they also have warned that sin leads to eternal death , while repentance and faith leads to eternal life. Answer: But is not there a vast difference between believers and non-believers ? Believers should live by the Christian message , while non-believers can hope that they will live as good people, something they very rarely are able to make fully when they are not born again. You write : Regarding Vision Norway I can not see that Hanvold lifestyle and theology (which I believe is incorrect ) shall preclude that one should be able to use his channel to reach out with a true gospel . As long as you do not enter tape on preaching I actually think that the media can be used even if half the staff there live in conflict with God's commandments. Answer: Whoever enters the Hanvold channel undertakes to conceal God's word , not least with regard to remarriage . If not then become ostracized . Of course this is an unwritten law . You also wrote : However, I would not preaching denying what I think is right and wrong too about remarriage . I repeat : The time has now come to lay down your blog or delete any post where naming specific people . Answer: Get behind me , Satan , Jesus said and I will say the same! Kjell writes: One thing that strikes me is that you seem to spare the Nardus sect from your criticism about remarriage . A number of key ministers also Nardus is divorced and married again . I could also have mentioned names. Answer: Do not as well extended to Nardus movement . It is no more than others , so that you reviews Nardus as a sect is not good if you believe such . the other Christian movements are not sects . For me, all Christian sects movements when no longer based on the word of God . Who else a Jon Welo is re-married to preach the word of God ? Do not know about more about it sure is, who? Regards Jan K

Andersen : Answer: 1 Remarriage is contrary to God's commandments and thus sin both reborn and ugjenfødte . This should be part of the ministry. In my view, all committed to living by the commandments of God , Christians who are not Christians. 2 If I was offered airtime on Vision Norway I have taught that remarriage is contrary to God's commandments and words. I spoke with Nessa about exactly this , and when the church year texts touching theme will of course Nessa present what God's word says on the matter. 3 Your third answer is testament to a wrong attitude on your part that you should rethink the interests of those affected . 4 Nardus , more preachers than he can mention is divorced and married again . One of the younger preacher brethren found themselves shown a " free church lady " as wife number 2 I will not mention names .. Also more of the sect elders are divorced and remarried , and thus it is propagated down the " grassroots level " in sect .

Me : Answer: 1 Remarriage is contrary to God's commandments and thus sin both reborn and ugjenfødte . This should be part of the ministry. In my view, all committed to living by the commandments of God , Christians who are not Christians. Answer: marriage intuition is for all people , but Gentiles most are the "normal" breaking Gods law . There is an almost . Christians who stand , are not allowed to remarry because they are light and the children of today . 2 If I was offered airtime on Vision Norway I have taught that remarriage is contrary to God's commandments and words. I spoke with Nessa about exactly this , and when the church year texts touching theme will of course Nessa present what God's word says on the matter. This I think not . Even Hanvold mentor and idol Rodney Howard Browne was shut out when he preached against remarriage . In other words , Nessa will experience the same if he takes up this theme and highlights the basis of God's word. Hanvold even said on Radio here in Oslo ; "To hell with all those who do not accept that I am times! » . 3 Your third answer is testament to a wrong attitude on your part that you should rethink the interests of those affected . Jesus said to Peter the same thing I say to you, you have no taste for the things of God , but the people. Preachers are role models and that's double shame for them to remarry or marry a divorcee . 4 Nardus , more preachers than he can mention is divorced and married again . One of the younger preacher brethren found themselves shown a " free church lady " as wife number 2 I will not mention names .. Also more of the sect elders are divorced and remarried , and thus it is propagated down the " grassroots level " in sect . Who he was younger ? Was the son of Rydland ? Thought I would write an article about Jon Welo , do you know him ?

Andersen : I know who they are. I thought you were going to write an article on principle . Tell the world what the Bible teaches , but does not mention a single name when you first affects the person ( couple ) you will " rebuke " . In addition, frames can personenens parents, siblings, relatives , and worst of all . You affects children . Children can be incredibly vulnerable. Not very fun for a 10 year old to hear that " your dad is a whore buck " who can not control their urges . I seemed to depersonalize the issues you write about sin among Christians = delete all blog where you tell everyone that "John and Marianne are whores and whore bows. I know who Welo is , but he has children that you must consider. Therefore I believe it is fundamentally wrong to mention people with the name and image in such a context . Create gladly fiery speech against the remarriage of principle . When you are not hurting children and innocent ... I've already heard about children who have been bullied because their dad 's been hanging out with name and picture in your blog, but what do you do if a 10-12 year old get so bullied because of your "See and Hear " method that boy or girl commits suicide ? It happens because of bullying ... and I think when God will hold you accountable .. In your answer: If Hanvold throwing out Nessa because he preaches the church year text that contains the section on remarriage , we have a bit of an issue. When censoring Hanvold preaching .

Me : Kjell please answer me the following. Hanvold great role model and mentor for up to 2-3 years ago, Dr. Rodney Howard Browne was banned Vision Norway since 2011 when he preached against Hanvold many divorce and subsequent remarriage !

Andersen , Jan Kåre . We do not know the whole story , I think . In most circles it's much wonder and it was well a relatively confidential relationship between Browne and Hanvold . In other cases one speaks of a professional lease of airtime where Hanvold clearly not have to much preaching he does not agree in. Although Adventists are the tv vision Norway , and I suppose Hanvold is deeply disagree with much of what is taught by Adventists . I gave Nessa that advice , go through the door that opens, but do not compromise on what you preach. He agreed to it and we concluded that as long Hanvold not meddle in the message so it is only running on . If he closes the door because Nessa preach what the lyrics say it is a completely different situation .

Me : You do not answer . Always elusive faced pig Hanvold . What do you think he has closed Rodney Howard Browne ? Do you think Ludvig Nessa will be better treated if he preaches against remarriage ?

Andersen : As I have written many times before, I can not see that the Bible justify some forms of remarriage among either regenerated or ugjenfødte . I see no point in flashing the named persons . I think it's good that Rodney Howard Browne is closed out . His preaching style and I have little sense of . But the foundation he is thrown out , I did not measure if it is the only reason then. Since Browne has " prophesied " over Hanvold beard and that these two have been close kindred spirits in terms of process theology recognizes that Hanvold I have nothing personal against Browne level deeper than a corporate deal. These two have been buddies and shared platform and predicted good days of each other hue, and if anything when cuts are often worse than if they solely relate to a "deal " on prime time . On your question remains the to see what happens when it eventually becomes a reality, but I doubt that Hanvold settles really indulge in preaching that is recorded in a local outside vision Norwegian television studies.

Me : What time of year comes about divorce and remarriage ? 1-2 months . afterwards Nessa fired guaranteed if it gets publicity about this. And it is not sure he gets started even if he reads my blog or that which takes up the L Nessa speak against remarriage . I know these unwritten rules, they are worse than the Ten Commandments ! To me appears you that rather naive and little reflective regarding this topic . For Hanvold gospel means 0 % and 100 % of his abdomen ! Nessa lifetime of eyesight Norway is going to be very short if he preaches against the "big" captain ! Hanvold said it right out here on the radio in Oslo. To hell with anyone who does not agree that I am re-married . Nessa does not survive long on vision Norway . Jan K

Andersen : The time the grief Jan K. Important not take sorrows in advance.

Me : Hanvold is the greatest villain I 've seen in a Christian front, and he wonders soon enough you also even more roll around !

Some believe in Santa Claus and other trolls, Hanvold is also trolls. To believe that the great Chief Hanvold will accept service of remarriage that marriage should last a lifetime . Hanvold answer and boycotting all who oppose him , so must also Ludvig Nessa reckoned with if he wants to preach about divorce and remarriage ?