Nr. 484: Evangelist Benny Hinn married again - with the same wife - this is what we strive to happen!

Evangelist Benny Hinn married again - with the same wife - this is what we strive to happen!

Evangelist Benny Hinn married again with the same wife, reconciliation, unification and what God has joined together, no separation teaches writing.

Paula White and Benny Hinn, which he fortunately repented from. 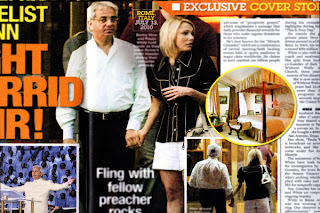 Here pictured with Suzanne, his first wife and remedy

From Wikipedia on Benny Hinn:

Benny Hinn (born December 3, 1952 in Jaffa, Israel) is one of the most famous television preachers in America. He is a member of the Assemblies of God, one of the largest organizations within the Pentecostal movement in the United States. Hill is of Greek-Armenian descent.

He founded the Orlando Christian Center in 1983. And has since distinguished himself as a preacher who believes God is using him to heal people. Since the 90's, he will be subjected to much criticism, including for a number of false prophecies. Among other things he prophesied in 1989 that Fidel Castro would die within 10 years. The same year, he prophesied that the east coast of the U.S. will be hard hit by an earthquake within a few years. He has also been criticized for a high spending, and in particular, many responded that he lives in a house valued at over 50 million.

Lord I need a miracle is a book written by Benny Hinn, and he's also the author of Good Morning Holy Spirit. The first is a book with ten testimony. One of them is Hinn's own story of how he defied his parents and became a Christian. You get also learn three principles in order to receive a miracle, four maxims for a life of health and seven key truths to retain a miracle. (End of quote).

Benny Hinn was in conjunction with a new after breakup with Suzanne and gave the blame for the breakup of his wife, this newspaper's Our Country:

Svenska day has undergone any of the allegations Benny Hinn has made in the past, and note that the evangelist has trouble telling the truth.

Vatinkanbløff. The magazine National Enquirer printed photos of Benny Hinn and TV evangelist Paula White hand in hand outside a luxury hotel in Rome. This weekend let Hinn out a retraction on its website. There, he writes that the purpose of the visit to Rome was to discuss the possibility of a future work for the Vatican. Svenska Today reporter contacted the Vatican. Father Federico Lombardi, the Vatican's official spokesman said that Hinn has never been invited there. Hinn was however in the Vatican in 2008.

- Some visitors would sit in the front row at a papal audience. They considered donating money to a major restoration of an organ. Hinn was one of them. If he gave money or not is unknown, according to Lombardi's Day.

Vatican City is known with whom Benny Hinn is but believes a partnership with him is impossible.

Million Bluff. In a long speech collectives under Word of Life's European Conference on Sunday, Benny Hinn claimed that three million people came to believe during one of his campaigns in Bangalore, India in 2005. 7.4 million visitors visited during three days at Jakkur airstrip, according to Hinn himself. He also says that all government members were present and raised his hands.

Founder of the All Indian Christian Council, John Dayal, rejects that as many as 7.4 million people were present at the meeting. He has been informed that half a million stopped. Police have noted a number under a million. Dayal know including former Prime Minister Deve Gowda, and states that he has never seen a Hindu politician convert public. In a new video segment on its website asking Hinn donors to donate money. He is two million dollars minus.

- Some of you probably think, cutting down on expenses. Believe me, I've cut down on expenses. We are just skin and bones right now, he says. The magazine The National Enquirer has published photos of them hand in hand in Rome.

Divorce. Neither Hinn and White claim that the pictures are faked, and they confirm that they were in Rome at the same time. According to Hinn they recorded a TV program together, and had not seen each other in years. Benny Hinn says that he was invited to the Vatican to discuss future opportunities for work there.

Benny Hinn wife Suzanne submitted an application for divorce in February. The divorce is not yet a fact, and Hinn has said that he will work to save your relationship. Strengthened friendship. Paula White has been a great help in the difficult process of divorce, Hinn writes in his retraction on the case in The National Enquirer. White himself has been through two divorces.

- I do not deny that our friendship was strengthened as a result. While the ratio has consistently remained morally pure, I celebrated the company of someone who has gone through the trauma of a painful, public divorce, writes White. (End of quote)

Benny Hinn must at some time have a good in itself, and found their way back to the Lord and their proper and first spouse, who Scripture says:

These are good examples, good, wonderful, beautiful and big as Benny Hinn does. Repent, ending with Paula White. And pray for reconciliation with his first wife Suzanne and correct. 3 years, they have been away from each other, but they found each other again. And this is something God will bless sure when he has joined together, no man separate.

Divorced from his wife in 2010. Now they marry again.

The prolific and controversial television preacher Benny Hinn was separated from his wife Suzanne Hinn Hartern in 2010, Suzanne filed an application for divorce due to "irreconcilable differences" after 30 years of marriage.

But last week revealed that the evangelist couple marry again in December.

Divulged the news on the meeting: According to the newspaper Charisma News announcement took place during a so-called "Miracle Crusade" in New York. Violinist Maurice Sklar attended the meeting, revealing excited news on Facebook: "Pastor Benny dropped a bomb on us tonight. He and Suzanne have reconciled! He announced that they would remarry in December! I almost fell off the chair. I almost collapsed on stage. What a wonderful God we have! I'm so glad to hear this good news! "Wrote Sklar, according to Charisma News.

Benny Hinn even commenting on the repair of the relationship on their websites. There, he writes that the two last July celebrated the holidays together, and that the process of repairing the damage to the marriage has begun. "As many of you know, my wife Suzanne and I have been through a difficult season in our lives and in our marriage. Although I can not announce anything about what's going on, I ask you to continue to pray for our family and watch This Is Your Day (Hinn daily television program, journ.an.) To see the glorious news of what God do, "writes Hinn.

When the couple was divorced two years ago, initially refused to admit Hinn reason for the divorce and said that he was shocked by his wife's behavior.

Later television preacher said that the couple had had problems for several years, and that he had been a preacher calling ahead family. (End of quote).

Dear friends, this is what we in Smyrna Oslo works. That those who are divorced can not find himself a new, but goes back to his first and straight spouse. Make than not it operates as a hor said the Lord Jesus Christ on several occasions.

Even for a man who Evangelist Benny Hinn's a possibility of forgiveness, restoration and opportunity to begin again, only one will repent.

Ezekiel 18 20 He who sins, he shall die: the son shall not bear the iniquity of his father, and the father shall not bear the iniquity of his son: the righteousness of the righteous shall be upon him, and the wickedness of the wicked shall be upon him. 21 But if the wicked will turn from all the sins he has committed and keeps all my decrees and does what is lawful and right, he shall surely live - he shall not die. 22 None of the offenses he has committed shall be remembered against him for his righteousness which he hath done he shall live. 23 Shall I have the pleasure in the death of the wicked? says the Lord God - mon and not that he should return from his ways, and live? 24 But if a righteous man turns from his righteousness and commits iniquity, doeth all the abominations that the wicked man does, should he live? None of the righteous deeds which he has done shall not be mentioned unto him: for the transgression he has shown, and for the sin he has committed, he shall die. 25 And I said: Lord's way is not right. Hear, O Israel! Is not my way right? Is it not your ways that are not straight? 26 When a righteous man turns from his righteousness and commits iniquity, he shall die for the punishment of it, for the injustice that he does, he will die. 27 And when the wicked turn from his wicked way and do justice and righteousness, he shall save his life. 28 He looked and turned away from all his transgressions that he had made, he shall surely live - he shall not die. 29 But the house of Israel say, The Lord's way is not right. Are not my ways right, O house? Is it not your ways that are not straight? 30 Therefore I will judge you, O house of Israel, every one according to his ways, saith the Lord GOD. Repent, and turn yourselves away from all your transgressions, lest any man iniquity shall be to you drop! 31 Cast away from you all your transgressions, that I have sinned with you, and get yourselves a new heart and a new spirit! Why will ye die, O house of Israel? 32 For I have no pleasure in nogens death, says the Lord God: so repent yourselves, and ye shall live;

I do not know if something similar in Norway that a preacher who is divorced, has gone back to his first wife and facilitate the writing teacher? I'd love to come to know, when should we posted about it on your blog, for a wonderful, lovely and pretty it is! Would like to know about this, formulas you can write about it and we put this on the blog. For us in Smyrna Oslo is the success stories we want to share and pass on, Hallelujah and thank goodness, and Amen!

Benny and Suzanne Hinn deserves praise, support and prayers for what they have done together!

I do not know everything, but I would recommend seeing their wedding ceremony, think and reflect through this. And keep this up as the standard and goal of all who are divorced, there are only two ways out for Christians. Whether to live single, or the best way, reconciliation and to remarry. As Benny and Suzanne Hinn now made 3 March 2013.