No. 1541: The only thing that can deprive President Donald Trump of not being re-elected for 4 new years as President of the United States, are probably the postal votes where his votes can be rejected or omitted!

No. 1541:
The only thing that can deprive President Donald Trump of not being re-elected for 4 new years as President of the United States, are probably the postal votes where his votes can be rejected or omitted!

What are postal votes?
It is that one votes, and does not put the ballot papers in the ballot box.
But sends it per. mail.
This is very easy to really cheat with. It is then only a matter of either removing the ballot papers or rejecting them.
This can present a major problem in the United States, now!
This is probably the only thing that can deprive Donald Trump of the victory in the Presidential election this November.
Pray for Trump that he wins and that no votes are rejected or removed!
That it must be and be a fair choice!

Picture of Melania and Donald Trump. 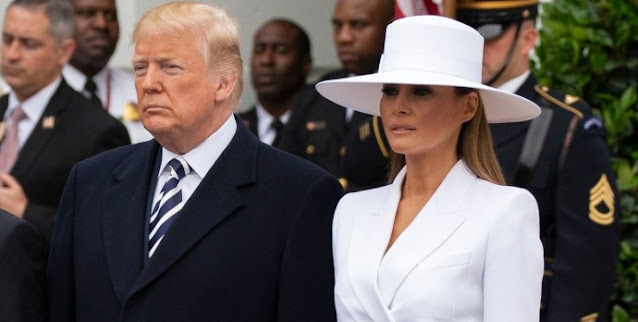 What Trump has done right


When you read the Norwegian media, you can almost get the impression that everything Trump does is wrong.

No other American president has been the subject of so much criticism in the media as Donald Trump. And there will certainly be more for this presidency, which is so special that it is actually difficult to find historical parallels to it.

But when you read the Norwegian media, you can almost get the impression that everything Trump does is wrong and that none of what he does is good. But this is of course and fortunately not the case.

Therefore, this editorial - regardless of the overall impression we have of his presidency - is about three important things that Trump in our eyes has done right during his presidency. It's about the economy, China and Israel.

When businessman Donald Trump was elected president on November 8, 2016, the world's most important stock index, the Dow Jones, stood at 18,000. At the time of writing, it stands at almost 26,500, a growth of just under 50 percent.

We should note that this sharp increase has come despite the worst pandemic in the world in over a hundred years. The Trump administration has pursued a business-friendly policy that has obviously had a positive effect on American business and thus also on the global economy.

At a time when many governments, including our own, are demonstrating an embarrassing indifference to the increasingly powerful China, it has been refreshing to see how Donald Trump has the courage to stand up to the communist regime. For China's aggressive ambitions on the global stage are perhaps the greatest long-term threat to a peaceful and democratic development in the world.

Then it is crucial that there are leaders in the free world who dare to challenge the authoritarian rulers in Beijing. Donald Trump is obviously such a leader.

The American presidents' confession of friendship with Israel is almost like a regular ritual. But Donald Trump proved to be a true friend of Israel not only in terms of beautiful words and promises, but also in deed and political realities.

The most important and symbolic step he took in December 2017 when the United States recognized Jerusalem as the capital of Israel and carried out the relocation of the American embassy there. Congress approved such a move as early as 1995, but all more or less pro-Israel presidents have since vetoed the decision.

Trump has also recognized the Golan Heights as Israeli territory. Thus, the world's most important nation has finally abandoned the meaningless belief that this strategically crucial area will ever be handed over to the terrorist regime in Syria.

Under Trump, the United States has also moved away from the use of the word "occupied" in other areas under Israeli control. For example, it is no longer called "Israel and the Occupied Territories" in the US Department of State's annual human rights report. It now says "Israel, the Golan Heights, the West Bank and Gaza".

Opponent of the upcoming presidential election, Joe Biden, has said that even if he disagrees with Trump's Jerusalem decision, he will not reverse it. Israel's friendship will thus remain a lasting legacy after Donald Trump, regardless of how things go in November.