No. 1540: Had I been a Sikh, Hindu, Muslim or something else and been bullied and discriminated against as I have been by the Discrimination Tribunal / Unibuss, I would have been front page material guaranteed in VG, Dagbladet, Aftenposten and other media!

Had I been a Sikh, Hindu, Muslim or something else and been bullied and discriminated against as I have been by the Discrimination Tribunal / Unibuss, I would have been front page material guaranteed in VG, Dagbladet, Aftenposten and other media!

2 Tim. 3. 1. But know this, that in the last days perilous times shall come. 2 For men shall then be selfish, money-loving, eloquent, arrogant, mocking, disobedient to parents, ungrateful, unholy, 3 unloving, unreliable, slanderous, immoderate, unloving, without love of good, 4 deceitful, impulsive, inflated, love their lusts higher than God, 5 who have the skin of godliness, but deny its power - and these you shall turn away from.

This is from 2011, 9 years ago. The truth is that it is us Christians who are provoked and are more vulnerable than anyone else.

I argue that we Christians will never threaten or retaliate against anyone physically, only verbally.

Conservative leader Erna Solberg believes that Muslims are incited in the same way as the Jews were in the 1930s. She asks Norwegians to deal with everyday racism.

Picture of a Muslim ready to defend himself, while we Christians would never do such a thing. Illustration image. 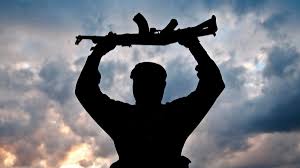 These should be overprotected, but we Christians are not even allowed to listen to the radio until we are threatened with dismissal from our job, this is what I am experiencing these days.

I do not see myself as a victim, so far from it.

But it is still strange to experience that one is approached freely wild and has almost no legal protection!

I have experienced false accusations against me on several occasions, and still not won in Norwegian law and before the authorities!

This fact that I listen to the radio, is not documented by any invalidity party that I hear out loud.

And if that had been the case, I would have turned it down.

Christian persecution and discrimination, no doubt what I have been subjected to!

Here is an email sent to the Civil Ombudsman in my case:

Appeal against Disktriksnemda's decision in case 20/42

It is only mentioned that it is sick leave that is a night of revenge.

The whole case against me is a retaliation for not being a person they have managed to crack as they have tried for decades!

The night of revenge, retaliation and reprisals against me are far more than sick leave!

These are really repeated service charges and try to find all possible errors to use them against me in all possible ways.

This actually started in 2007-8 when Unibuss had to withdraw a service charge.

I went to the Discrimination Tribunal in January 2020 and then it got so bad that I was prosecuted for matters that were insignificant and that I had played again on Christian radio.

But other words that they have disputed sick leave they have also done before. Blue. in 2017 as a night of revenge and reprisals that I did not participate in their prank.

The actual sick leave that is disputed is only a small and ugly part of the whole picture. There are several reports of illness they have disputed, such as revenge, reprisals and retaliation against me!

The retaliation, reprisals and revenge have actually been going on since 2006 when I was summoned to a meeting with my then leader Tveit, which you can read about in the drawn-up service indictment.

Since then, the management of Unibuss has behaved badly and armored towards me by convening meetings in the east and west.

Get service charges for everything between heaven and earth.

Pull them and give new ones.

It's completely wild as they go, and it certainly does not end. Now they are incited after the cruel verdict from the Discrimination Tribunal!

This is murder de lux as I have never played loud on the radio and the so called customer complaints are false accusations that may have been given by Satanists and or others who hate Christianity and Jesus !!!!!! ??????? !!!!!! ?????

Those people can be anyone and they are not invalid and credible.

There is no objective party, and blindly trust those who also complain about me anyway. Some of the customer complaints are loud, all of them otherwise have both sound and the Christian message they dislike.

No customer complaints go only on loud sound, therefore this is no credible and invalidity complaint. But obviously that goes on my faith and that I also play Christian radio programs with a license and am legal by the authorities here in Norway.

Such programs as P7, Ptro, Visjon Sverige, Joh.3.16 and other programs on the radio that have a license and are approved by the authority.

I get provoked by some passengers, Unibuss and the Discrimination Tribunal!

They have put undue pressure on me for almost 15 years with false accusations, fabricated things and oversizing small trifles to the most "dangerous" incidents.

Everything is put out of proportion and I make the same mistake as others.

Others hardly hear it, I get more service charges for the same conditions.

This is not good

It's so bad that words do not suffice.

Something is documented, mostly not!

Unibuss has threatened service charges, given them, withdrawn them and given new ones.

I must be taken, it is so primitive and evil behavior that words do not suffice.

I have then obviously been subjected to retaliation and revenge by the management of Unibuss for decades.

Here is an example from 2016 which is also included in the ruling from the Discrimination Tribunal:

Furthermore, I have had instructors on the bus many times, they have never complained about the radio volume.

But complained about other matters as a retaliation and if possible to find fault with me.

Now they make new service accusations every time they find out that I have played on Christian radio programs.

This is both a night of revenge and reprisals against me on all levels.

How mean and hateful must the Unibuss management be before the Discrimination Tribunal sees it?

This is what I anchor, and that they do not see what is obvious even for a 4 year old!

No one stands up and speaks my case, I am a Christian and must endure so fervently all the injustice that befalls me.

If, on the other hand, I had been a Muslim or belonged to another religion, "everyone" would have stood up for me.

Everyone knows that it is a lie and hesitation that I hear loud on the radio.

But a murder against a Christian, who will never use force or violence.

It is so harmless and "safe" that this is what everyone does today!

Isaiah 5. 20 Woe unto them that call evil good, and good evil, that put darkness for light, and light for darkness, that put bitter for sweet, and sweet for bitter!