No. 1662: Israel 70 years - it is God's faithfulness and power that forms the basis of this people!

No. 1662:
Israel 70 years - it is God's faithfulness and power that forms the basis of this People!


Israel as a land, geography and climate is nothing extraordinary.The special thing is that God has called this people to live in the "ancient" canaan country where we find even. the limits that this country will have. The fact that Israel is accused of annexing and landing land is so far away from the truth it is possible to come.Ezekiel 36. 17 Son of man! The house of Israel dwelt in their own land, and unclean in their way and in their works; as a woman's monthly impurity was their way before me. 18 Then I poured out my wrath upon them because of the blood that they had poured out over the land, and because they had made it unclean with their abominable idols. 19 And I scattered them among the nations, and they strewed in the lands; according to their way and their deeds I judged them. 20 And when they came to the people they came, they profaned my holy name, and it was said unto them, These are the people of the LORD, and yet they shall go out of his land. 21 Then I was delighted in my holy name, which the house of Israel had profaned among the people whom they had come to. 22 Therefore you shall say to the house of Israel, Thus says the Lord, the God of Israel: Not for your sake, the house of Israel, I do it, but because of your holy name, which you have profaned among the people whom you came to. 23 I will sanctify my great name, which has been profaned among the nations, which you have profaned among them, and the people will know that I am the Lord, says the Lord, the God of Israel, when I reveal my holiness to you before your eyes. 24 I will gather you from the people, and gather you from all the countries, and I will bring you into your own country. 25 And I will sprinkle clean water upon you, and you shall be clean; from all your uncleannesses and from all your abominable idols I will cleanse you. 26 I will give you a new heart, and I will give a new spirit within you, and I will take away the stone heart of your flesh, and give you a heart of heart. 27 My Spirit I will give within you, and I will keep your commandments and keep my laws and do them. 28 Ye shall dwell in the land which I gave unto your fathers, and ye shall be my people, and I will be your God. 29 I will deliver you from all your uncleannesses, and I will call on the grain, and make it folded, and not bring famine upon you. 30 I will multiply the fruit of the trees and the field of the ground, that you may not suffer more from the famine among the nations. 31 Then you will remember your evil journey and your deeds that are not good, and you will be cursed by yourselves for your iniquities and your abominations. 32 Not for your sake, I will do it, says the Lord, the God of Israel. Blues and shame on your journey, the house of Israel! 33 Thus says the Lord, the God of Israel: In the day that I cleanse you from all your iniquities, I will let the people live again in the cities, and the ruins will be rebuilt. 34 And the land that was desolate shall be grown instead of that there was a desert for every man's eyes that passed by. 35 Then shall they say, This land that was desolate has become as the garden of Eden, and the ruined and destroyed cities are restored and have walls. 36 And the people who are left around you will know that I, the Lord, have built up what was demolished and planted the land destroyed. I, the Lord, have said so, and I will do it. 37 Thus says the Lord, the God of Israel: In this I will pray for the house of Israel, and I will do it to them: I will make it as rich in people as a flock of sheep. 38 Like a flock of flock, as the flock of Jerusalem at its high times, so shall the desolate cities be full of human heights, and they shall know
that I am the Lord.


Image of the Israels flag. 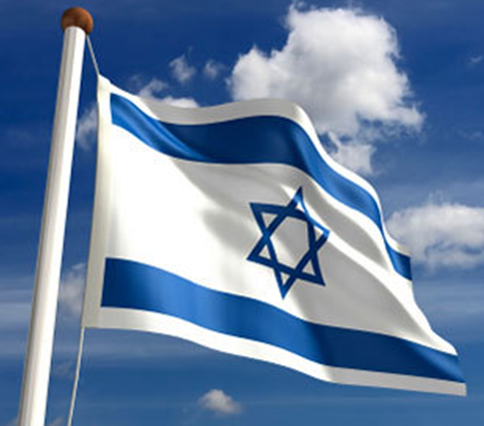 
. "Do not want to make this article so far too long, because I think this article already contains as much as most people need to read more often and take in what God says about this people. What his view is on this matter, when he is, and he alone who has chosen Israel to be something special. Yes. Jesus went so far to say that salvation comes from the Jews, so salvation for us humans and partake in it is conditional upon recognizing Jesus. But also God's plan and purpose with Israel. Therefore, it is with pleasure that one can congratulate Israel as an independent state, now 70 years old! Joh. 4. 22 You worship what you do not know, we worship what we know; for salvation comes from the Jews. It is and remains the election of God by this people, which makes them so controversial, "hardheads" and to the blessing and later exaltation that they will share. When we pagans will grab an Israelite and will go with him to the house of the Lord and to Jerusalem and worship and honor the Lord both together and in the same place! Isaiah 4 1. And seven women shall take one man in that day, saying, Our own bread will we eat In our own clothes we will dress let's just be called with your name, take away our disgrace! 2 In that day shall the sprout of the LORD be glorious and glorious, and the fruit of the land for pride and for the sake of the remnant of Israel. 3 And it shall come to pass, that whosoever shall remain in Zion, and shall dwell in Jerusalem, shall be called holy, every one that is written unto the life of Jerusalem. 4 When the LORD cleanseth the uncleanness of the daughters of Zion, and cleanseth the blood of Jerusalem from the midst of judgment spirit and cleansing spirit-Why are there seven women? It is obvious that then the world has gone through the great tribulation and there are few people left. In particular, World War I No. 3 people are waiting as the Bible mentions as the Gog War. Together, World War 4, the Armageddon battle. But after this, thousands of years of peace will come with Israel, which is God's great purpose with Israel, in addition to bringing us the people to the Savior Jesus Christ. Beside the Bible and most of the prophets, those who have written the Bible and are spoken in God's own word, they were Israelites. Isaiah 24. 1. Behold, the Lord drains the earth and puts it desolate; He changes his form and adsorbs those who live on it. 2 Then the priest as the people, the lord the servant, the wife as the maid, the seller as the buyer, the borrower as the lender, the governor as his debtor. 3 Empty, yea, the earth shall be emptied, and plundered, and looted; for the Lord has spoken this word. 4 The earth is mourning and fading away; earthly sicknesses and fades away; the utmost of those who dwell on the earth are sickening away. 5 And the earth is profaned among them that dwell therein; for they have violated the laws, transgressed the commandment, broken the eternal covenant. 6 Therefore the curse consumes the earth, and the inhabitants thereof shall be fined; because of this, Jacob's tribulation or the great tribulation, people will suffer when God's judgment goes over the world and especially those who have been neglected to Israel. Jesus tells himself what you have done to one of my least Jews, have you done to him! Matt. 25. 45 Then shall he answer them, saying, Verily I say unto you, What you have not done to one of these least, you have not opposed me. Mostly, it is negative to Israel to be negative to God. Be positive to Israel is the opposite, but salvation is in Jesus Christ. But who saved and redeemed. Then we stand up for Israel and speak their cause! The replacement theology is dangerous and unbiblical. That the church has "replaced" Israel is a lie, we as the church are only parentheses! (Romans 9-11). It is Israel that is, remained and being the people and God's people rather than anyone else in the sense that God has chosen them forever!
Lagt inn av Jan Kåre Christensen kl. 00:27