God's mighty providence - it impresses me!

Here Fana Church - a very pretty church.
I had actually written about this church before, read for yourself here: 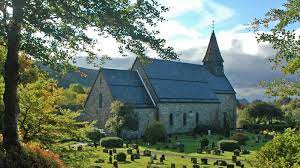 What is supply? A definition of this here:

The way I want to define this is that God controls everything, nothing happens by chance.
That the circumstances are "facilitated" as no human has only done.

Here from Store Norske Leksikon about this:
In the New Testament, the belief in providence is characterized by a simple and immediate belief in God. The starting point is not the idea of ​​a purposeful world order, but the belief in God's personal care. Man's life and the world are in the hand of God.
(end of quote.)

This happened last year when our daughter Sara was to marry Børge in Fana church in Bergen.

They decided to get married relatively quickly, but I submitted an application to my then employer Unibuss here in Oslo.
Wrote that it was a wedding, and important to get free.
I thought this was a formality, and a matter of course to get free when one was going to a wedding for one's own daughter.

What happened? The most incredible thing, I was rejected. Not only that, but with grounds that were completely beyond.
Unibuss encouraged to apply for time off for the drivers, as they had too many drivers.
My reason for not getting time off was that they had too few drivers.
What did I do? Not a single thing, except to pray.

I asked something like this:
"Dear God, this is, of course, a conspiracy by Satan. I have no control over this. Should I come to this wedding, then you have to arrange it, I do not get time off and the management is completely armored against me. In the name of Jesus, arrange it, you God! ”

I could not do more, my application for leave had been rejected, on the grounds that it was false and not true. But what else could I do?
Kun be!

Here is one of many messages I received, that I did not get time off.

You must apply in good time to SelfService so that staffing can plan how many can be granted leave.

If those who have applied in good time have been granted leave, it is difficult to revoke their leave in order for you to be released.

Rejection for not coming to my own daughter's wedding, most important day of my life almost! Talk about rubbing salt in my wounds - d'oh!

What happened when all hope was gone and there was no way?

This is God, hear what happened!

It is, of course, an impossibility that can come both way and flow in the wilderness, but not for God.

I had a small problem with the body that needed a little surgery.
Had been to the doctor just before, and been granted that this should be taken.
With that would only happen up towards Christmas, when there was a ½ year waiting time.
Hallelujah, there is something called the providence of God, the corona and God that is greater than all and that governs all.

What happened? Because of. corona, Erna had decided that it was a free choice of hospital and I sat down at Volvat.

The surgical procedure went perfectly, and after an operation where one had to sew some stitches. Then I had to have a few days sick leave, hallelujah!

Hallelujah for the guidance of God and that he stands above all and all!

God's guidance was obviously this.
But here everything was a director who surpasses my and someone's comprehension!

All dates, hours and times were 100% correct, it was impossible for any person to arrange this, least of all me as the management of Unibuss were just defiant, painful and difficult!

Think of King Nebuchadnezzar, who thought he was only greater than God, but was struck with a disease in which he ate grass and behaved like an animal.
The examples are many, no one can sit over God and behave like a bajas and darling. It goes to a certain point, then it says stop and God is in charge!