No. 1525: Personally, I believe that Jesus will come again in a period of time between 20 - 40 years, when Israel will first build the temple, begin with sacrifices and wait for the Antichrist with whom they will enter into a "pact of peace"!

No. 1525:
Personally, I believe that Jesus will come again in a period of time between 20 - 40 years, when Israel will first build the temple, begin with sacrifices and wait for the Antichrist with whom they will enter into a "pact of peace"!

Antioch 4. Epiphanes is called the Old Testament Antichrist.
We find him in Daniel's book chapters 8 and 11. 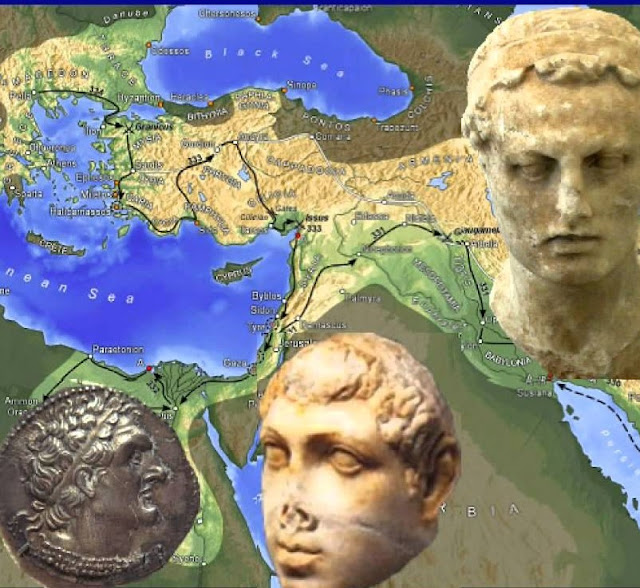 After the Macedonian-Greek world empire disintegrated, the kingdom was divided into four under his army leaders. Antioch came from the Syrian part. He ruled in the years 175-163 BC This is where the idea of ​​the Antichrist's example comes in.
All in the early Christian era, one pointed out that John, with "the Antichrist," undoubtedly meant the same person Paul calls the man of sin, the son of perdition, the lawless. (1 John 2: 18: 4.3. 2 Thess. 2,3: 8.)

Paul says of the man of sin that he is "who opposes and exalts himself above all that is called God or sanctuary, so that he sits in the temple of God and pretends to be God". (2.Tess.2,4). The similarity and reference are not to be mistaken, the wording is almost the same as in Dan.11,36!

Antichrist law firms
He could do the most terrible blasphemy, the violation of God's temple in Jerusalem. The gold-plated incense altar, the golden candlestick, and the curtain between the holiest and the holiest of the temple were removed. After three years of profanation, in the year 164 BC the temple could be cleansed and re-consecrated under the leadership of the macabre family. At the time when the news reached Antiochus of how his army lost to the Jews, he was ill and later died in Babylon in 163 BC.

Many of the God-fearing Israelites never really finished Antiochus Epiphanes, the man who had hurt them so much. He lived on in the minds of many as an example of the wickedness to come in the end time before the Messiah came and took power from the wicked.

In Daniel's prophecies we read about “the little horn” emerging from the next world empire (the Roman) which is the end-time kingdom. (Dan.7,7-8; 19-26). Antichrist is both a person and a system. He is the individual who forms the pinnacle of a satanic system, and whose spiritual power and direction are always present as the secret of lawlessness. (2.Tess.2,7).

“The king will do as he pleases. He shall exalt himself and exalt himself above every God, and to the God of gods he speaks terrible words. He shall prosper until the wrath is ended. For that which is determined will be accomplished. " (Dan.11,36)

Here many Bible scholars believe that a theme change is taking place, and we look past Antioch to Antichrist himself. This goes far beyond what Antiochus did. He made the Jews worship the Greek gods, but the Antichrist should not care about the gods of his fathers. He is greater than all of them, and here the true nature of the Antichrist is revealed. He invokes divinity and rewards the worship of men.

Antiochus is the prototype of the coming Antichrist, and we find great similarities between them, only that the Antichrist's regime will be so much more terrible in scope, and the nature of his deeds so much more cruel.

The Word of God speaks very clearly of Israel being deceived and deceived - again!
Joh. e. 5. 43 I have come in my Father's name, and you do not receive me. But if another comes in his own name, you receive him.

One could say that Israel has been misled in all areas throughout history. Idolatry, sin, heresy etc.
But never been deceived that a false Messiah and Savior whom they have believed and trusted. Jesus rejected them, and all others who have also tried themselves.
This is what is going to happen, which Jesus and the prophets talked about.
And that the temple will be rebuilt, and we must expect that the sacrificial system will somehow get started again.
Of course, this is seduction.
Then Jesus has fulfilled the law once and for all, and the Old Testament sacrificial system is no longer "valid"!

Heb. 7. 23 And of their priests there were more, because at death they were prevented from persevering; 24 but this one has an incorruptible priesthood, because he abides forever, 25 and therefore he can also perfectly save those who come to God through him, as he always lives to intercede for them. 26 For such a high priest we also had to have, holy, innocent, pure, separated from sinners and exalted above the heavens, 27 one who does not every day need, like the high priests, first to offer sacrifices for his own sins, then for the people; for this he did once for a Even when he sacrificed himself.

As long as Israel - and every human being - does not believe in Jesus and his finished work on Calvary. Then one is really under the control and influence of darkness.
It is wonderful what has happened to Israel.
They have not only got Canaan on their hands, but above all the great city of Jerusalem. It is a "forgotten" event, which is of the utmost importance.

Luke 21. 23 But woe unto them that are fruitful, and to them that give suck, in those days! 24 There shall be great distress upon the earth, and wrath upon this people; 24 And they shall fall at the edge of the sword, and shall be taken captive unto all peoples; and Jerusalem shall be trodden down of the Gentiles, until the time of the Gentiles be ended.

When King Nebuchadnezzar invaded Jerusalem, we reads the book of Daniel, the Book of Kings and the Book of Jeremiah, then the time of the Gentiles began.

From Wikipedia:
When Nebuchadnezzar conquered Jerusalem in 597 BC and destroyed the city nine years later, he took captive large numbers of the people of Judea into Babylon to ensure that the country could not return. This Babylonian captivity is described in chapters 24–25 of the Second Book of the Old Testament. According to Hebrew tradition, the king captures the prophet Daniel and tries to convert him to Babylonian faith, but the young prophet opposes all attempts.
The book of Daniel tells Daniel that he becomes a dreamer of the court and that Nebuchadnezzar, who shows pride in his own kingdom, and does not give God the honor, is punished for eating grass and living like a wild animal for seven years without meeting other people. [read Daniel's book]
It is also told how Nebuchadnezzar casts the three godly men Shadrak, Meshach, and Abed-Nego into a fiery furnace, but without being consumed or harmed by the fire.
(quote at the end.)

Jesus himself says that when Israel reigns and has control over Jerusalem, the time of the Gentiles is over.
In 1967, a partial fulfillment of this prophecy happened.

Large Norwegian Encyclopedia:
The Six Day War, the term of the third Israeli-Arab war, which lasted for the six days from June 5 to 10, 1967, and fought between Israel on the one hand and several Arab states - primarily Egypt, Jordan and Syria - on the other. The Six Day War was short-lived, but has had long-lasting political repercussions for much of the Middle East, and not least for Israel, which subsequently became an occupying power. Israel still has control over much of the West Bank, and over the Golan Heights and East Jerusalem that are annexed.
(quote at the end.)

There is also a lot of nonsense here that East Jerusalem is annexed, this is of course a lie. It belongs only to the Jews, no one else.
But that in many ways Israel gained dominion over Jerusalem, it announces that the Gentile's time is soon over and it is Israel in conjunction with the Lord Jesus Christ and King David who will rule the whole earth, where law and justice will go from Jerusalem to the utmost of the earth.

37. 24 And my servant David shall be king over them, and there shall be one shepherd for them all, and they shall obey my laws, and they shall keep my commandments and do them. 25 And they shall dwell in the land which I gave Jacob my servant, wherein your fathers dwelt; they shall dwell in it, they, and their children, and their grandchildren for ever: and David my servant shall be their prince forever. 26 And I will make a covenant of peace with them; it shall be an everlasting covenant with them; and I will settle them in my land, and I will make them numerous; and I will set my sanctuary in the midst of them for ever. 27 And my dwelling shall be upon them, and I will be their God, and they shall be my people. 28 And the people shall know that I am the Lord, who sanctifies Israel, when my sanctuary is in the midst of them for ever.

This is the future of Israel, but Israel will also do things that announce the King of Kings and the Lord of Lords.
Blue. they will rebuild the temple, that is where the Antichrist will sit down and demand worship. Then Israel will reveal him, and the great tribulation begins.
With a 3 ½ years of hardship outside our grasp.
Only with 3 ½ years of false peace when Israel and the Antichrist will have made a covenant with each other. Then Jesus' words will come true.

Joh. e. 5. 43 I have come in my Father's name, and you do not receive me. But if another comes in his own name, you receive him.

At the same time, Jerusalem will for the last time "deprive" Israel, and they must flee from the Antichrist and the whole world will actually pursue them.

In other words, things will also happen to Israel as Scripture speaks clearly.

In many ways, one can say that the congregation is like the great watch on the clock.
But the little pointer is Israel.

When Israel regained its land in 1948, the bell of God struck a mighty blow.
Israel's rebirth lse is a powerful show at this time.
Two parallel things happen. The gathering of Jews in Israel and the selection of the Bride of Christ. Just as the Lord is now allowing Israel to go through difficulties in physically occupying and retaining the promised land, God spiritually cleanses his church on earth.

Jesus does not return until the Jews cry, "Baruch atah beshem adonaj."

Blessed be he who comes in the name of the Lord!