Now Jan Aage Torp has a feud against Levi Fragell. I very much doubt that he is coming. Comparing the case with me and Fragell is an impossibility that Torp does in several posts on his many websites.
The Oslo police and the courts hated me for my Christian faith and confession, and behaved completely, completely behind targets.
I had never written, spoken or otherwise done anything punishable by what they convicted me of.
Section 390a of the Criminal Code "for violating another's peace by intimidating or troublesome behavior or other reckless conduct".
The truth was that Torp and Fuglesteg were the ones who called for ABB's followers, successor and twin soul. As well as Birding's goal was to kill me which was the most bad thing that was said and written. This completely overlooked the police and the courts, although this was brought forward.
That I call and call Torp a whore, a narcissist and a cynical manipulator, I stand for, as I have written and spoken.
It is, above all, true, which is not what is written and spoken about me.
That they will do this to Levi Fragell I highly doubt that he will be charged, punished and convicted. He is of this world, and is basically a Christian hater, and such does not punish society!
Fragell also said that Torp's remarriage with his nanny was terrific. It shows that Fragell and Torp are both on the same "team" and belong to the same realm and have the same values. They are both children of darkness and belong to the kingdom of Satan. Believe that Torp can compare me and Fragell, who will probably be overprotected by the police and the courts, would get me started. It was a very dirty game.

Here, Levi Fragell accepts Torp's threats of review. He could report me and win when the Oslo police and the courts did everything to get me convicted, but I highly doubt that it goes to others.
Then there will be fright. 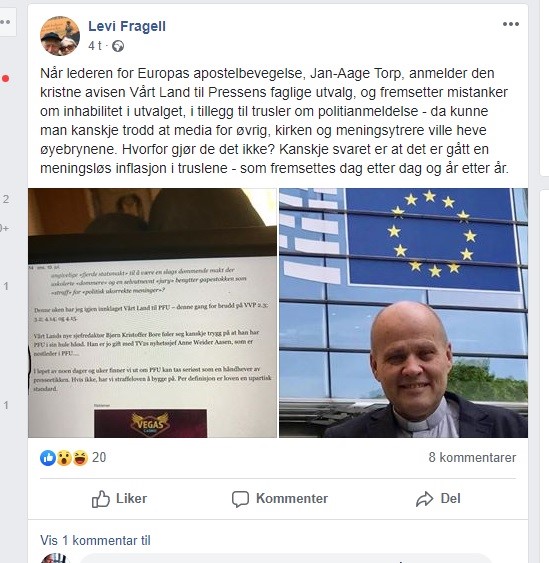 1.) This is what Elin P. Gregusson writes:
Although Torp is controversial and never so reviled, he is not "stupid".

Answers:
Jan Aage Torp is not only stupid, but hateful and stupid.
When Torodd Fuglesteg had a campaign for probably over 2-3 years to call me for everything possible as a child murder supporter, Anders Behring Brevik twin soul, follower, successor and most of all what else could be mentioned. Who hung out with the same karastics? Jan Aage Torp.
Jan Aage Torp is both stupid and evil.

2.) He is not spiteful, ironic or educated either.

Answers:
Jan Aage Torp is probably the most spiteful, naughty, ironic and non-formed person one can imagine?
He cannot tolerate being contradicted or taught at all. He is constantly offended and constantly seeks attention for his own person.

Here is some of what Jan Aage Torp has called me, it speaks.
As well as what he has labeled others for.

It is Torp who hates me, what we preach and reveal on the Heavenly Blog!
He himself can condemn anything and everyone. The homosexuals are scum and are a cancerous force in society that must be removed. I am a liar and Demon etc.
But when he himself is required to live by the word of God as a public "Pastor" and "Apostle" the whole world goes down. He is really a diaper boy who needs supervision as he is unable to stand up as a man and accept a noise that he demands of everyone else except himself! But it does not go into the world of God!
The kingdom of God also has its laws, ordinances and something is required to call itself a citizen of the kingdom of God.
We find this not least in the teaching of Jesus and Paul that speaks of remarriage for a believer is adultery, adultery, and living in sin!

"Anders Behring Breivik sympathizer, twin soul and follower". (many, many times).
"If you want a" wish opponent ", Jan Kåre Christensen is" perfect ".

Furthermore, Torp writes that I am filthy, stalker, totally unintelligent, a bullshit, the "hat-blogger", idiot, demon, lusts, mean-spirited blogger, protagonist who lacks the mind of Christ, ordinary judgment and social intelligence. Rumor JKC and, to say the least, his insight into English and Norwegian is pretty limited too!
I am struck by what low level JKC is acting on…. "

Think, Pastor Jan Aage Torp has admitted everything too, but is not charged or punished for anything. Yes, the children of the world and the evil know how to protect and fend for each other.
Torp himself also admitted in his testimony that he also called Christensen on his website both "lies", "idiotic", "rumor spread", "bad", "evil and stupid" and communicates "social pornography" +++ a lot , much more!

Why does Jan Aage Torp call me for all these ugly things? By several reasons, first and foremost, that I have revealed him as who he really is, through evil, dangerous, manipulative and a truly narcissist.

You should not always believe in flattery. Sometimes the intention is really just to lower your defenses and make it easier to manipulate you. When someone flames you, they serve your good will. But they do not always do it with good intentions.

The best antidote to flattery is knowing yourself well. No one knows your strengths and weaknesses better than you. If you know yourself, unpleasant admiration and flattery will come as a surprise to you. Other people will not be able to "smear you".
Torp also played offended and wore and always has many hats on forever to achieve his goals and intentions as the manipulator and psychopath he is and remains.
With me Jan Aage Torp did not come any way.
Then he went to the police and the courts who were more than willing to do the job for psychopath Jan Aage Torp.
Notice that everything I've written and spoken about Jan Aage Torp has been true,
From what he has written and talked about me, it is a lie from beginning to end, just like the Devil is. Torp is obviously one of his "initiated" ones, and is so far away from healthy and true evangelical Christianity it is possible to come!

Joh. e. 8. 44 You have the devil to father, and you will do your father's lusts; he was a murderer from the beginning and does not stand in the truth; for truth is not in him. When he speaks lies, he speaks of his own, for he is a liar and the father of lies.

Jan Aage Torp can for example. run a person for 1.5 Million, take the money, spend them and then say that they are ill and have to fend for themselves.
It is so contradictory it can remain. He is bad, evil and ugly, this is the real Jan Aage Torp,

Elin P. Gregusson's testimony of Jan Aage Torp that he is a smart and fine man is so far away from the truth it is possible to come.
He is really an old "pig" who ravages and keeps on reaching his goals and selfish goals. The scriptures say about the following:

Obvious. 2. 2 I know of thy works, and of thy work, and of thy patience, and that thou canst not bear the wicked; you have tried those who say they are apostles and are not, and you have found them to be liars;

2 Cor. 11. 13 For these are false apostles, deceitful workers, who make themselves apostles of Christ. 14 And it is no wonder; for Satan himself transforms himself into an angel of light; 15 Therefore there is nothing great about him, and his servants turn to the servants of righteousness; but their end shall be according to their deeds.

From My Bible Commentaries Jude 10 These, on the other hand, mock what they do not know, and what they understand with their senses, like animals without reason, only serves to destroy them themselves.

A very famous preacher said that he treated the Holy Spirit like a dog. They do not know what they are doing.

If we enter into the spiritual realm then know that it must be on the Lord's premises not our own.

It's bad about homosexuality with it getting 10 times worse when those people want God's recognition for their sin! The same is true with remarriage and other sins. The worst place one can put up a remarried person is on a lectern! It is an abomination in the eyes of God, but if he sits on the last bench, it is not so severe if God never accepts sin.

11 Woe to them! They have turned in the same way as Cain; they have gone out in the same delusion as Balaam, the one who was seeking their own gain, and they have rebelled as Korah and perished.

Here it is warned not to go against the Lord's messengers and to deal less with them and to hate them.

Cain hated Abel when his sacrifice was appreciated by God but not his.

Balaam was a heathen that the Spirit of God worked through, but it was when he went against the Lord for some money that judgment came upon him.

Korah went against Moses and it became his course. Moses was a trusted man to God and to go against him was like going against the Lord Himself.

12 They are ashamed of your love-meals; where they participate without fear. They are shepherds who only provide for themselves, clouds that run in the wind without rain. They are trees without fruit in the fall, twice dead, yes, torn up with root.

One of the most serious things one can do is make mistakes with the sacrament.
Whether to take this lightly. On the day of taking the sacrament there must never be any obvious sin in life, then it is infinitely better to let go.

Or one must not attach sacrificial significance to the sacrament by saying that there is salvation in it or that it is literally the blood and body of Jesus. It's a memory and sample meal.
There are many who believe they support the cause of God and the church but keep a life in the False Prophets. This is what the Lord will one day give you to account for.

In reality, many are spiritually dead if they can quote a Bible verse and sit in their own studio to carve out their own message that is similar to the Bible's true message. Twice dead then all hope is out and about only judgment and death await.

13 They are waves upon the sea of turmoil, which foams its own shamelessness, astray stars, as the eternal night darkness awaits.

The verdict on these people had not been so catastrophic, they had buzzed and not misinterpreted God in their lives.

The strangest thing I see is people cursing a God they say does not exist. They make it worse for him to interfere with his life. God demands full respect and recognition of everything he stands for or you have to leave something to do with him.

James 4 5 Or do you mean empty words when Scripture says: With burning zeal does God claim the spirit He has placed in us? 6a But the grace he gives is greater.
Lagt inn av Jan Kåre Christensen kl. 11:46