Nr. 423: Destruction is a punishment that is eternal owing to that it can not be reversed!

Destruction is a punishment that is eternal owing to that it can not be reversed!

The lake of fire and all that ends there will be destroyed right before God the Father makes all things new, and all evil will be destroyed forever! Lake of Fire is a symbol expresses where God will fire frame everything and everyone within its range and it is the people, fallen angels, demons, the false prophet, the Antichrist and Satan himself who will be destroyed by the fire of God! 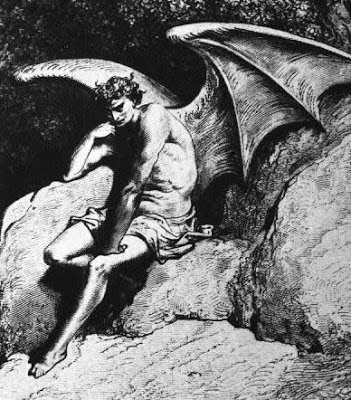 Matt. 25. 46. "And these shall go away into everlasting punishment, but the righteous to eternal life." (Bible of 1611. Copyright: Morten Gjemlestad 2003)

2 Thess. 1. 9. "These shall be punished with everlasting destruction from the presence of the Lord and from the glory of His power." (Bible of 1611. Copyright: Morten Gjemlestad 2003)

It is obvious that the word of God is not speaking of a literal eternal torment, but a torment that will last forever in the sense that the judgment that affects those who do not accept Christ will find their unbelief and disobedience had eternal consequences when their rejection of Christ inflicted them an eternal separation from the only true God!

Eternal damnation in God's word is to be destroyed!

As fire struck Sodom and Gomarra will fire again meet the unbelievers and Satan with his conspirators, and he will forever be removed by the fire of God that is to be destroyed if not in the light of his life which it is obvious that Satan and the unbelievers are not!

From my commentaries Revelation 20 10 And the devil that deceived them was cast into the lake of fire and brimstone, where the beast and the false prophet are. There shall be tormented day and night forever and ever.

Here Satan and all who followed him last end. That they will be tormented day and night is biledelelig voice when night shall cease when God creates a new heaven and a new earth. The Bible does not speak of literal eternal torment, but when you have turned away from God and the opportunity is passed. So it becomes an agonizing and painful entrance into nothingness and destroyed - do!

One day God will create a new earth and new heavens where no unclean or wrongdoing should be. Then it is obvious that Satan and all his accomplices are wiped out, in what way? Just as Sodom and Gomorrah was the fire of God. When the fire - the fire of God - hit the towns became destroyed. The same demise is for all unbelievers and do not follow the Lamb!

Jude writes that "Sodom and Gomorrah and the cities around them" is "given as examples, and they suffer the punishment of eternal fire" (Jude 7). The doctrine of an eternally burning hell where sinners will be tormented forever, do not belong in the Bible. This idea derives from Greek philosophy, and was mixed into Christianity long after the first missionaries had gone out with the gospel. It was mainly in the Roman Catholic Church that hell doctrine found footing, and over the centuries, threats of eternal punishment in hell brought grief, fear and suffering to thousands of people. The doctrine has been argued for so long that many people today think it really has its roots in the Bible. Understandably enough, many choose to reject such a God. It is directly macabre wanting to torment people with fire for eternity, not to mention letting the redeemed and the angels witness it. It would make heaven a place of sorrow. But that's not true. The Bible gives no support to this hell doctrine. Instead we are told about eternity: "And God will wipe away every tear from their eyes, and death shall be no more, neither will mourning nor crying nor pain will be no more, for the former things are passed away." (Revelation 21 , 4). Sodom, Gomorrah and the cities around them would be an example of "the punishment of eternal fire." No flame burner there today. All that is left is ashes. It could burn, burned up. Nothing is left, everything was destroyed. The legacy of those who are being saved it is eternal life in God's kingdom. The wicked are not part of this legacy. They will not receive eternal life. Instead, they will be destroyed forever. "For evildoers shall be cut off. But they that wait upon the LORD, they shall inherit the land. It's just a little while, and the wicked are not there anymore. Surely, you will look carefully for his place, but it is no more. But the humble shall inherit the land, and shall delight themselves in abundant large peace. "(Psalm 37.9 to 11).

First mentioned in Scripture what the wages of sin is:

1 Genesis 2 15 And the Lord God took the man and put him into the garden of Eden to tend and keep it. 16 And the Lord God commanded the man: You may freely eat of every tree in the garden, 17 but the tree of knowledge of good and evil you must not eat, for in the day you eat of it you shall surely die.

Rom. 6. 23 For the wages of sin is death, but the gift of God is eternal life in Christ Jesus our Lord.

Lifting is unambiguous and clear in both the Old and New Testament, death awaits those who will believe and obey.

We first meet the consequences of sin and live a life without communion with God is that he shall die. We first meet a truth of God's word is essential. And the times we face the truth again is just to illustrate the same truth just from a different page. Lift is ready for human if they reject Christ. There are literally dying, not right away. But it is the consequence and result of putting God without passing in his life.

Here is an article I wrote a few years ago:

What does the eternal damnation?

It translates the Greek word aion, aionos much better than eg King James.

And this with hell. If you and I could Hebrew and Greek to the fingertips - and had never read the Bible before, and never had been littered with poisonous sermons, we would read the Old and New Testament, without having an idea of ​​such a terrible place.

Hell theology emerged as a result of the Catholic theologian Jerome, who already believe in a burning hell after death for not believing (This idea occurred ca. 500 years after Jesus' death, and has roots in Egyptian and Greek pagan philosophy of an existence after death in either a kind of heavenly paradise or a terrible place with fire and torment. In the Bible we find 4 words wrongly been translated into HELL of Jerome. His Bible, The Latin Vulgate, the basis for most modern translations today, and has led to the erroneous doctrine of an eternal hell is continued. It's Oden Sheol (the grave, as Job begged God to send him to), Hades (the grave in Greek), Tartarus (a spiritual prison where a group of fallen angels who seduced earth women before the flood is imprisoned), and Gehenna. Jesus spoke of Gehenna, which is a physical place in Jerusalem. Ironically enough, Gehenna today a very beautiful garden in Jerusalem. Jerome translated all these four words Infernus - meaning an inferno of flames - HELL. He has, in other words, done that Jesus says we should not do: namely, remove anything and add anything to God's word. When Jesus spoke of Gehenna indicted him the future judgment in the Lake of Fire. This is a very interesting study - but Jesus never once suggested that Gehenna is eternal punishment place, where people will be tortured forever.

In full harmony with eg. 1 John 4:14, John 4:41, Col. 1:19,20 - 1TIM4: 10 etc etc. I just had to get this in order to complete the argument. In God's plan, there are several ages. The only thing that is eternal is that which begins after the judgment and the lake of fire, namely the Kingdom of God in the New Earth with the New Heaven, where God himself will be all in all the earth. It is an age which has a beginning, but no end. Therefore, it becomes synonymous words here forever as here in Matt. 28. 20 and teaching them to obey everything I have commanded you. And surely I am with you always, to the end. " The basic text is that until this age. Thus also annihilation process of all wicked, it will take an age! A beginning to an end. So it is with this age we are inside now. Mercy and the church age that has lasted for 2000 years.