Picture of Job's friends blaming Job, his wife in the background. 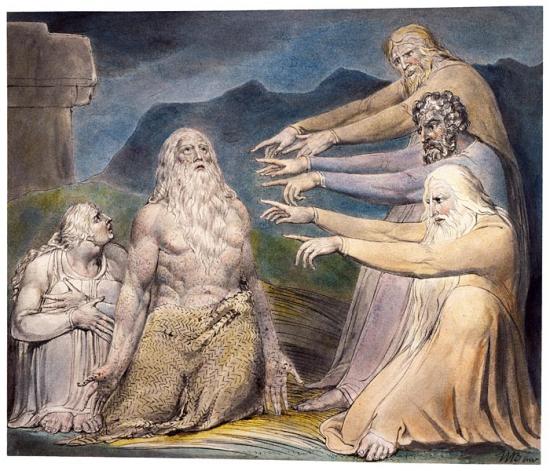 Job Book 2. 11 And when Job's three friends heard of all this calamity that had befallen him, they came every man from his place: Eliphaz of Teman, Bildad of Suah, and Zophar of Naamah; and they agreed with one another to go to him to show him compassion and to comfort him. 12 But when they looked up from a distance, they did not know him, and they burst into tears and tore their robes and threw dust against the heavens, over their heads. 13 And they sat with him on the earth seven days and seven nights, and no man spoke a word to him; for they saw that his torment was very great.

What is so exciting, rewarding and educational with the Word of God, especially for us believers. It's that here we read about our lives, what's going on. The entrance, the course of events and the exit!
The Word of God speaks directly into time and into our lives, today!

Job's children are referred to as living well because Job was blessed. Can even say that fat lived on Dad's blessing. But they did not have the intimate relationship with God, neither did their parents? This was not ideal, but Job's love for his children was as intense and great as if they were living completely with God.

Furthermore, we read about Job's friends who, after all, had the most to say about Job in his difficult trials he had now entered!

What is noticeable here are many things. Job's book is full of examples, educational ones. It is a book of real depth.
But to bring out some things, I only take out certain verses and events.

Job Book 2. 11 And when Job's three friends heard of all this calamity that had befallen him, they came every man from his place: Eliphaz of Teman, Bildad of Suah, and Zophar of Naamah; and they agreed with one another to go to him to show him compassion and to comfort him.

Today, it is not rumor we hear first and foremost. But through mass media, Facebook, blogs and other things we get involved in what is happening. Here was actually the response laber you ask me. The wife stood by Job's side, if she did not fully support him. No one who lived near supported Job, only 3 who came from afar.

Eliphaz of Teman, Bildad of Suah, and Zophar of Naamah; and they agreed with one another to go to him to show him compassion and to comfort him.

These are locations located south of Israel on the border with Jordan and Egypt today. Yes, the areas are further south than the city of Eilat in today's Israel, opposite Petra in Jordan and Sharm El Sheikh in Egypt. But that is not crucial, there were three people who talked among themselves and decided to go to Job.

It's about Job. Job 1. 1. In the land of Uz there was a man named Job; he was an immaculate and righteous man, who feared God and departed from evil.

This seems to be in today's Jordan or Iraq when it goes on to say that he was more powerful than all the children of the East? But come in from the land of Us.
Anyway, we read that there were only three long-distance travelers who came to Job in his hardships and difficulties. They did not live close by, but gathered together and consulted.
Then they went to Job to have compassion and comfort him. It doesn't matter how long the trip took, but it was probably a trip with several nights as we know that people without a car and other modern means of travel max managed to travel more than 5 miles in one day.

Why did Job's friends come?

Job Book 2. 11 And when Job's three friends heard of all this calamity that had befallen him, they came every man from his place: Eliphaz of Teman, Bildad of Suah, and Zophar of Naamah; and they agreed with one another to go to him to show him compassion and to comfort him.

Notice that they sat for a whole week without saying anything, "for they saw that his torment was very great."

If they had been on "facebook" and of the few who had clicked, they would have liked the click and it turned out in retrospect that it had been better that they had not come. But had been on Facebook and clicked Likes.
This of course in transferred meaning. But that's exactly the problem with so many people.
They understand very, very little what others are going through. Especially when it is spiritually related.
Therefore, the account of Job tells very much.

Room. 15. 4 For all that is written before, it is written unto us for doctrine, that we may have hope in the patience and comfort of the scriptures.

Scripture also says: Preacher 5. 1. Do not be too hasty with your mouth, and do not let your heart rush to speak a word before God! For God is in heaven and you are on earth; therefore let your words be few!

We get it wrong so often, why? We cannot and cannot see into the spiritual world that governs everything in this natural and human world.
We do not see what is behind it, and then we cannot let natural and human wisdom and understanding guide and guide us.

What is the testimony of God about Job's friends?

Job. 42. 7 When the Lord spoke these words to Job, he said to Eliphaz of Teman, My anger is kindled against you and your two friends; for you have not spoken of me as my servant Job.

Read what Job's friends were talking about, it was largely biblical and true. Men anyway, it was the words of unbeliever and of the evil into Job's life and case.

So it was with all those who were also to guide Jesus. We read about the apostle Peter and Jesus the following.

Matt. 16 20 Then he commanded his disciples not to tell anyone that he was the Messiah. 21 From that time Jesus began to make known to his disciples that he should go to Jerusalem, and suffer much of the elders, and the high priests, and the scribes, and be slain, and be raised on the third day. 22 Then Peter took him aside, and began to rebuke him, saying, God save thee, O Lord. this must by no means be acknowledged to you! 23 But Jesus turned and said to Peter, "Fold me behind, Satan! You will lead me to fall.

The human thoughts and ideas, they are not from God.
Therefore, the old and fallen man does not realize this. He will always reject from him everything that has to do with God.

What did Judas say when Jesus was anointed?

Joh.e. 12. 3 Then Mary took a pound of real, very precious nard's ointment, and anointed the feet of Jesus, and wiped his feet with her hair; and the house was filled with the scent of the ointment. 4 One of his disciples, Judas Iscariot, who was to betray him, then says: 5 Why was not this ointment sold for three hundred pence and given to the poor?

This is typically the old man. As we humans are in ourselves, we are so often completely out in the open. We do not understand and understand the spiritual where the real struggle is and is.

Job's struggle - as every believer's struggle is - is not against some people first and foremost. But it was spiritual, and it was a battle against Satan.

We read that it was Satan who came before God and challenged God to let him be tried.
Likewise, the Apostle Peter felt that Satan was allowed to "try and test" Peter.

Luke 22. 31 Simon! Simon! behold, Satan demanded you to be violent in order to aim you as wheat; 32 But I prayed for you that your faith might not fail, and that once you repent, strengthen your brothers!

The purpose of what we are going through - is also that we should become like Jesus. As he grows and grows, we are being erased more and more.

It is strange that when one gets into difficulties, there are very few who can help. And the "help" one gets is usually not of the good kind, why?
I do not have a satisfactory answer to this. The closest answer I have is that if you have not gone through serious difficulties yourself, you cannot help others who are going through the same thing.
This is a very simplification but the closest I get is an answer.
Finally, include what the Apostle Paul wrote.

2 Cor. 1. 3 Praised be God, the Father of our Lord Jesus Christ, the Father who is rich in mercy, the God who gives all comfort! 4 He comforts us in all our distress, that we may comfort those in need, with the comfort we ourselves receive from God. 5 For just as we have abundant part in the sufferings of Christ, so also through Christ we are given abundant comfort. 6 If we suffer pain, it is for your comfort and salvation. If we are comforted, it is for you to receive the comfort that helps you to endure the same suffering we must endure. 7 Our hope for you stands firm. Because we know that as you share in the suffering, you also share in the comfort.

Notice that it was with the same comfort - the same "level" one has experienced things himself. That one will be able to help and comfort others.
The Christian life must be endured to be tested, and then we can be enriched and comforted!
Lagt inn av Jan Kåre Christensen kl. 05:11