No. 1518: Preteristic understanding of scripture!

No. 1518:
Preteristic understanding of scripture!

Find Arne Lauvås who once preached and taught right, today he is a preterist delusional teacher.
This teaches a complete distance from understanding the Bible as a book in which one speaks clearly and clearly. But one ends up in a conspiracy where everything is to be understood "spiritually". Where one ends up in a floating and complete meaning of God's word!
Finn Arne teaches following.

Isaiah 11.6. Then the wolf shall dwell with the lamb, and the leopard shall lie with the cow;
This closet is not literally understood, this is spiritual. The Millennium is fiction.
Yes, yes, this must be understood as the old fallen nature "extinguishes" as well.
There is so much wonder with this doctrine, spending too much slit on such heresy, is really throwing pearls for pigs. 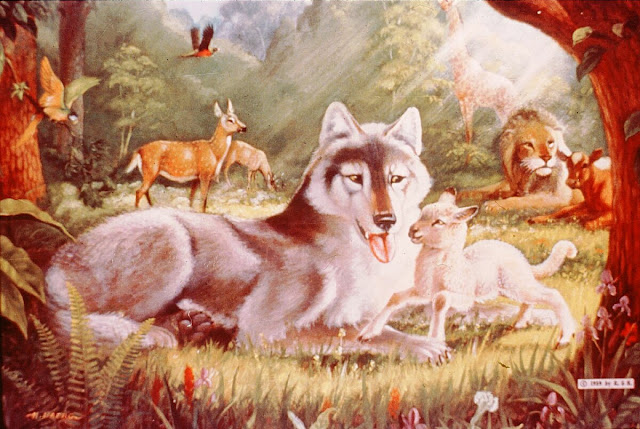 The preterist interpretation of Scripture concerns the Book of Revelation as a symbolic image of early church conflicts, not a description of what will happen in the end times. Preterism denies the future prophetic quality of most of the book of Revelation. To varying degrees, preterism combines the allegorical and symbolic interpretation with the concept that Revelation does not deal with particular future events. The preterist movement essentially teaches that all end-time prophecies in the New Testament were fulfilled in the year 70 AD. when the Romans attacked and destroyed Jerusalem and Israel.

The letters to the churches in Revelation 2 and 3 were written to real churches in the first century, and they have practical uses for churches today. But chapters 6-22, if interpreted in the same way as the rest of the Bible prophecy, were written about events that are yet to come. There is no need to interpret the prophecies of Revelation allegorically. Previously fulfilled prophecies were literally fulfilled. For example, all of the Old Testament verses before the First Coming of Christ were literally fulfilled in Jesus. Christ came at that time that he was predicted to come (Daniel 9: 25-26). Christ was born of a virgin (Isaiah 7:14). He suffered and died for our sins (Isaiah 53: 5-9). These are just a few examples of hundreds of Old Testament prophecies God gave to the prophets who are recorded in the Scriptures and which were literally fulfilled. It simply does not make sense to try to allegorize unfulfilled prophecy or understand unfulfilled prophecy by any means other than a regular reading.

Furthermore, preterism is completely inconsistent in its interpretation of John's revelation. According to the preterist view of the end times, chapters 6-18 of Revelation are symbolic and allegorical, not describing literal events. However, Chapter 19, according to the preterist, is to be understood literally. Jesus Christ will literally and physically return. Then Chapter 20 is again interpreted allegorically by preterist, while Chapters 21-22 are literally understood, at least in part, in that there will truly be a new heaven and new earth. No one denies that Revelation contains wonderful and sometimes confusing visions.

No one denies that Revelation describes some things figuratively. But to arbitrarily deny the literal nature of choosing parts of Revelation is to destroy the basis for literally interpreting some of the book. If seals, trumpets, bowls, witnesses, 144,000, animals, false prophets, millennial kingdoms, etc., are allegorical or symbolic, on what basis do we claim that Jesus' second coming and the new earth are literal? There is failure in preterism - it leaves the interpretation of Revelation to the opinions of the interpreter. Instead, we should read it, believe it, and obey it — literally and accurately.

Preterism is another form of Replacement Theology. The basic idea of ​​Preterism is that all prophecies of the congregation's time should only have a spiritual fulfillment. They add the fulfillment of the great tribulation and the Antichrist, to the year 70 AD, when Jerusalem was destroyed.

They also believe that Jesus came again in the spirit, and that the Millennium was established as a spiritual kingdom, where there is peace. Within this Bible vision it is learned that Emperor Nero was the Antichrist. That is bad with the story when Nero died in the year 68 after Christ. In Dan 9.27 and 2 Thess.2.8 it says that the king of kings will destroy him, but Nero took his own life.

The Bible is interwoven with spiritual imagery, which has its spiritual significance, but it can never take away the physical fulfillment of prophecy. The Bible can be interpreted in several ways: historical, prophetic, and spiritual. No one can deny today that there is a country called Israel and a people called Jews. This country and people have been around for 4000 years.

Jerusalem is the country's capital, which it has been for over 3000 years. Jerusalem has been mentioned over 800 times in GT and NT. We also have a spiritual Israel, "God's people ", which consists of both Jews and Gentiles. Those who belong to spiritual Israel, or whether you want the church of God, are circumcised on the meat boards of the heart.

We see that today's Bible prophecy is fulfilled in a strong and compelling way for earthly Israel. What has happened since the state was restored in 1948 is nothing more than a powerful proclamation from God, regarding the promises made to his earthly real estate people.

On the other hand, we are also witness to seeing clear prophecies, which are happening and fulfilled for the Church of God today. The tragic thing in this context is that the Preterists completely disregard Israel as God's people, and to which the Lord God of Israel has made such rich promises.

Rom kp. 9 speaks of Israel yesterday, Rom 10 speaks of Israel today and Rome bp 11 speaks of Israel tomorrow. In verse 11, we clearly see the many promises the Lord has made to His coming as King of the people. From Zion shall come the Savior, He shall set his feet upon the Mount of Olives. From Jerusalem, the law shall be deleted…

When we follow Preterism, there are many things about this doctrine that differ. They see all the fulfillment of Scripture as spiritual events, furthermore it is doubted whether there is an eternal torment for those who are not saved! The idea of ​​annihilation is also widespread in this teaching.

There is what is called full Preterism and what is called partial Preterism. This doctrine is another form of Replacement Theology, scriptures are extracted such as: Isa. 49: 3 as proof that Christ is Israel before God now. It is true that Christ is referred to as Israel in this verse. But the proper context is that Christ in the above verses stands as a role model on, the ideal Israelite.

The Bible, "The Word of God," is steeped in Hebrew thinking, not Western thinking. Scripture is full of paradoxes, it is not the words of logic, we preach, but the words of faith.

Israel's physical and spiritual restoration tells us that God is behind both the natural and the spiritual. In Preterism and its followers, there is a strong over-emphasis on the spiritual. God who both creates and saves is not clear enough.

In Gnosticism, Jesus 'humanity was dimmed in favor of Jesus' divinity. When the spiritual side is so cultivated, it becomes out of date to speak of a future for Israel on this earth. One is almost only concerned with shadow versus reality when it comes to law and grace, while there is also a connection between the pacts.

Let us be aware that this doctrine is seduction and leads astray. If Israel is Israel and the Church is a church, then most things fall into place.

Don't use that much more space, but also read the links I attach.
Do you have questions?
Send them to me by email: jk.chris@online.no
There is so much to this teaching and this preaching that I really want to define it as swarming and bland.
It is simply not worth spending too much time, effort and space on as it is really easy to reveal as unbiblical.
Lagt inn av Jan Kåre Christensen kl. 11:49