When we started the Smyrna congregation here in Oslo in 1991!

Will try to reproduce and remember the correct names, years and circumstances.
It is now well over 30 years ago, and unfortunately there are some things that are probably not remembered exactly as they were?
Hope you are forgiving with me regarding this!

Berit and I got married on January 22, 1988, and when we started the congregation Smyrna Oslo in September 1991, we then had our two girls. Our youngest son and son were born in 1994.
Then in Haugesund, while the girls were born at Aker Hospital here in Oslo.

As for my preaching work, I will try to reproduce some events that preceded this with the fact that we started Smyrna Oslo in the early autumn of 1991.

Picture from Møllergata 38, where we had established a business with regular meetings. Meetings that were so wonderful and wonderful, that I have not experienced anything like it since. It was on the 3rd floor here in this building we had regular meetings 30 years ago 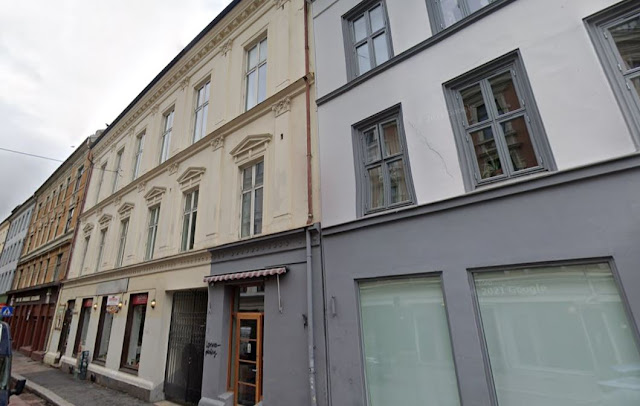 I was saved on January 25, 1981, at Frie Venner's local Ebenezer in Skudeneshavn on Karmøy. Where I grew up.
http://janchristensen.net/artiklerhoved.php?side=Mitt-personlige-vitnesbyrd

I received a call and equipment as a preacher, which I will schedule for Spring 1982.
It was not like I could say I got the writing on the wall. But received confirmations and an inner testimony about this.
https://blog.janchristensen.net/2012/05/nr-419-anbefaling-som-evangelist-og.html

Describing a call to preaching is not easy as I did not experience it as a clear voice coming from heaven, but with baptism in the Holy Ghost it "came forth" in me!

Before that I was an "anonymous" believer, but with that experience I got a supernatural power and anointing. The first person to say to me directly that I remember having a calling to preach was a nestor in the free friends Bjarne Staalstrøm. I was saved in January 1981 and baptized in the Holy Spirit with tongues April 82. Calling to preach came with my Baptism of the Spirit. Got confirmation from one publisher, yes several publishers in free friends.
Blue. Bjarne Staalstrøm who said directly to me that I had a calling to preach as I have already mentioned. I think that was in May 1982 after I had testified at a meeting at Ebeneser in Skudeneshavn where I grew up. He took me aside and spoke to me and said as I remember it that I had a calling to preach. I do not remember all things verbatim but I asked something like that how he could know? Then he replied that heard that when I testified so noticed that he this was not just me, but an equipping and insight into the word of God given me by God. Afterwards, I started, among other things. at the bible school at Smyrna Bible Institute as it was then called, now it is called the power school at Tønsberg in Re municipality. This is how it really went from strength to strength so that I can say that the budding call was not something from myself but from the living and almighty God. We talked about this yesterday me and my wife and she noticed when we were out and had meetings that the Holy Spirit was with very concretely and without a doubt, so I had a preacher call and a preacher assignment!

In 1991, we started the congregation Smyrna Oslo, which in many ways we succeed very well with

First we had meetings at home where we lived in Vestlisvingen 92.
We were actually almost 15 pieces I reckon at most in our apartment there.
It was wonderful.
So we had to rent meeting rooms down in the Center for the Sunday meetings, where we collected up to 30 pieces at most.
We had the meetings in Møllergata 38, in IOGT's premises which I think they have sold today. Mean to remember that it was on the 3rd floor.

We were a couple of couples who were in charge of the congregation, as well as an older prophet.
Joel Barsjø, of which we have an article on our website.
See here: file: /// C: /Users/Jan/Downloads/tildekkelse.pdf
Or go in here and press Cover - Joel Barsjø
http://janchristensen.net/artiklerhoved.php?side=artiklerrmenyhoved


The need for a congregation ala Smyrna Oslo is enormous

When I both look back on the importance of what we have done. As well as going forward, a church is needed that emphasizes not just what God wants and can do. But the Word - the word of God.

Matt. 22. 29 Jesus answered them and said, “You are going astray, for you know neither the scripture nor the power of God.

Important to know the scriptures, so as not to get lost!
This is what makes the congregation Smyrna Oslo was and is so justified.
If we now call the congregation the Oslo Bible Teaching Center.

Although this is now thirty years ago - is actually the need for and by a Bible believer and literal congregation larger than ever.
Emphasizing the word of God - in full!
Of course, one can "exaggerate" this and not least, "exaggerate" some aspects of God's word.
But still, in this time where one takes teachers and teaches in East and West.
Then there is the need for an "anyway" and Bible-believing congregation I will say more than ever!
Jesus himself said it so well and aptly:
Matt. 22. 29 Jesus answered them and said, “You are going astray, for you know neither the scripture nor the power of God.

Finally includes from my Bible commentaries Revelation 22.18
I say to everyone who hears the words of this prophetic book: If anyone adds anything, God will put on him the plagues that are written about in this book;

Here are some really strict words, yes a message that not least deals with our time where one would think that one had the best conditions to follow God's word. The torments that one should get here can be nothing but the other death - the lake of fire or hell. This is how I see it, no matter how serious it is.

Here we meet the same thing only rewritten. Now it's to pull something away from God's word that matters. If we pull something away, our part in heaven will be taken away. Do not gain access to the tree of life and enter the city or city, the New Jerusalem. This is about doing or is not it? To me, this means everything!