No. 1549: In all probability, there will be a labor lawsuit between me and Unibuss!

No. 1549:
In all probability, there will be a labor lawsuit between me and Unibuss!

This is logical thinking and most realistic, right?

At first I was a little unsure what to go for after I was fired or fired on November 20th.
What I was thinking about were several things, but after talking to several and considering what is right and best.
Then I came to the conclusion that as I see it, the whole resignation is a prank from beginning to end.
We will have a negotiation meeting on January 11 with me and my Lawyer Josefine Wærstad from YTF.
Where Unibuss has allied itself with the arrogant and foolish lawyer Johannes Straume and boss bully Per Christian Bing from Unibuss.

I consider Unibuss to be bullies, harassment and persecution and discrimination!

Then we'll see where we end up and what the court says!

These my lawyer Josefine Wærstad has met very clearly, consistently and well.

"The reason for the dismissal is that Christensen, despite several service charges, has not complied. Kristensen's response to complaints, and attempts at corrective action, show that he does not want to change behavior or also adapt to ordinary rules of the game in working life. "

There is a reference to service charges, it shows that Unibuss has engaged in bullying, harassment and persecution.

These service charges state, among other things: car washing as a problem. When I stand and wash the car with others, and this is embedded in the service indictment.
Then this is personal persecution!
It just shows that Unibuss is the worst thing in working life.
When it says that the following: "shows that he does not want to change behavior or also adapt to ordinary rules of the game in working life."

Then this is a perfect description of the inferior management in Unibuss that creates a dysfunctional and destructive work environment!

I am looking forward, and I just hope that various agencies wake up to the in many ways criminal and degrading bus company Unibuss that one gets shaken up and removed many in the management and make other positive and good changes!

We finally show that Unibuss, with various instructors, has been on the bus with me and only given me positive and good feedback.
This only shows that it is only to look forward to a possible lawsuit against Unibuss!
My Lawyer Josefine Wærstad surpasses Unibuss' prank on Lawyer a thousand times.
Only Johannes Straume is interested in, and he is also bad at it.
It is to blacken others.
https://blog.janchristensen.net/2020/09/nr-2757-det-er-bare-trist-at-unibuss.html

Given that we receive fair treatment, we will not be subjected to a murder as we were in the Discrimination Tribunal.

See here for feedback where I only get praise, and no one has anything to comment on when it comes to my radio play.
The fact that I play so-called loud radio is nothing but a lie!

The truth of the matter is that I drive a bus and do my job masterfully.
While the management with Abdullah Hatay, Andrej Peric, Per Christian Bing all act as one who bullies and engages in harassment.

If they had been interested and done their job!

Then they would have done everything differently. Not least verified these lies from some who claim that I play high Christian radio and have either confirmed or denied this.
If I had then played loud something I have never done.
Then they had asked me to mute the sound and see if I did this.
The whole case against me is nothing but fabricated lies! 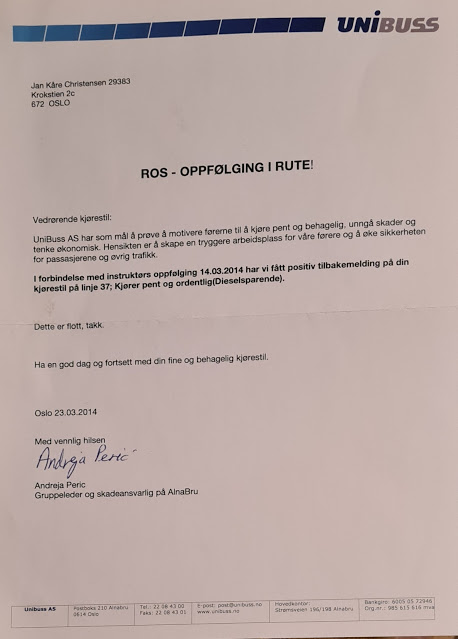